Twenty-six novel thiosemicarbazone derivative B1–B26 were synthesized via condensation reactions between the corresponding thiosemicarbazides and aldehydes. The chemical characterization of the compounds was carried out by infrared (IR), mass (MS), proton and carbon nuclear magnetic resonance (1H- and 13C-NMR) spectroscopic analyses. The compounds were investigated for their monoamine oxidase A (MAO-A) and monoamine oxidase B (MAO-B) inhibitory activity and most of them were more potent against MAO-A enzyme when compared with MAO-B enzyme. N-Cyclohexyl-2-[4-[(4-chlorophenyl)thio]benzylidene]hydrazine-1-carbothioamide (B24) was the most active compound against MAO-A. The enzyme kinetics study revealed that compound B24 has a reversible and competitive mode of binding. Interaction modes between compound B24 and MAO-A were clarified by docking studies. In addition, the favourable absorption, distribution, metabolism, and excretion (ADME) properties and non-toxic nature of compound B24 make this compound a promising MAO-A inhibitor. View Full-Text
Keywords: thiosemicarbazone; MAO-A; MAO-B; docking; MTT; enzyme kinetic study; ADME thiosemicarbazone; MAO-A; MAO-B; docking; MTT; enzyme kinetic study; ADME
►▼ Show Figures 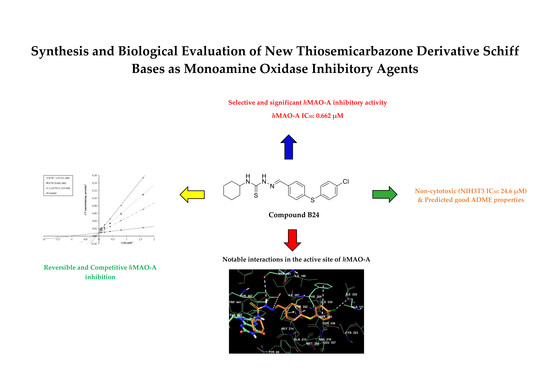