Antibiotic Resistant Superbugs: Assessment of the Interrelationship of Occurrence in Clinical Settings and Environmental Niches
Next Article in Special Issue

The goal of this research was to evaluate the anti-hepatitis B virus (HBV) activities of three compounds extracted and purified from Herpetospermum seeds (HS) on HepG2.2.15 cells. Herpetin (HPT), herpetone (HPO), and herpetfluorenone (HPF) were isolated from HS and identified using HR-ESI-MS and NMR. Different concentrations of the drugs were added to the HepG2.2.15 cells. Cell toxicity was observed with an MTT assay, cell culture supernatants were collected, and HBsAg and HBeAg were detected by ELISA. The content of HBV DNA was determined via quantitative polymerase chain reaction (PCR) with fluorescent probes. The 50% toxicity concentration (TC50) of HPF was 531.48 μg/mL, suggesting that this species is less toxic than HPT and HPO. HPT and HPF showed more potent antiviral activities than HPO. The 50% inhibition concentration (IC50) values of HPF on HBsAg and HBeAg were 176.99 and 134.53 μg/mL, respectively, and the corresponding therapeutic index (TI) values were 2.66 and 3.49, respectively. HPT and HPF were shown to significantly reduce the level of HBV DNA in the HepG2.2.15 culture medium compared to the negative control. This initial investigation of the anti-HBV constituents of HS yielded three compounds that revealed a synergistic effect of multiple components in the ethnopharmacological use of HS. View Full-Text
Keywords: HepG2.2.15 cells; Herpetospermum seeds; hepatitis B virus HepG2.2.15 cells; Herpetospermum seeds; hepatitis B virus
►▼ Show Figures 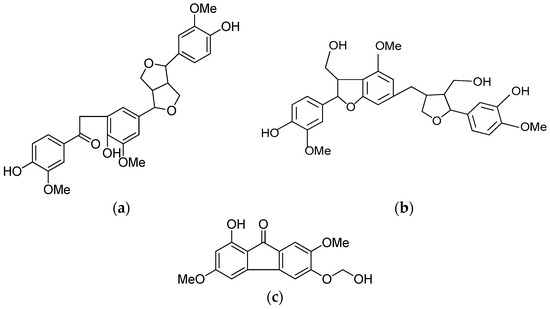