Antrodia cinnamomea (AC) has been widely used as a folk medicine in the prevention and treatment of liver diseases, such as hepatitis, hepatic fibrosis, and hepatocellular carcinoma. Previous studies have indicated that triterpenoids and benzenoids show selective cytotoxicity against human hepatoma cell lines. The aim of the study was to compare the triterpenoid content of extract and the extract-induced cytotoxicity in HepG2 cells from mycelia extracts of solid state cultured AC obtained by supercritical fluid extraction (SFE) and the conventional solvent extraction method. SFE with CO2 mixed with a constant amount of ethanol co-solvent (10% of CO2 volume) applied at different temperatures and pressures (40, 60 and 80 °C and, 20.7, 27.6 and 34.5 Mpa) was also compared in the study. Although the extraction yield of triterpenoids (59.7 mg/g) under the optimal extraction conditions of 34.5 MPa (5000 psi)/60 °C (designated as sample S-5000-60) was equivalent to the extraction yield using conventional liquid solvent extraction with ethanol (ETOH-E) at room temperature (60.33 mg/g), the cytotoxicity of the former against the proliferation of HepG2 cell line measured as the inhibition of 50% of cell growth activity (IC50) at dosages of 116.15, 57.82 and 43.96 µg/mL was superior to that of EtOH-E at 131.09, 80.04 and 48.30 µg/mL at 24, 48 and 72 h, respectively. Additionally, we further proved that the apoptotic effect of S-5000-60 presented a higher apoptosis ratio (21.5%) than ETOH-E (10.5%) according to annexin V-FITC and propidium iodide double staining assay results. The high affinity and selectivity of SFE on bioactive components resulted in a higher extraction efficiency than conventional solvent extraction. The chemical profile of the obtained extracts from solid state cultivated mycelium of AC was also determined by high-performance liquid chromatography electrospray ionization tandem mass spectrometry (LC-MS/MS), whereby three benzenoids and four triterpenoids were found for the first time in SFE extracts with 4,7-dimethoxy-5-methyl-l,3-benzodioxole (5.78 mg/g) being the most abundant component, followed by 2,4-dimethoxy-6-methylbenzene-1,3-diol (3.03 mg/g) and dehydroeburicoic acid (0.40 mg/g). View Full-Text
Keywords: Antrodia cinnamomea; solid-state culture; supercritical fluid extract; HepG2 cell; apoptotic activity Antrodia cinnamomea; solid-state culture; supercritical fluid extract; HepG2 cell; apoptotic activity
►▼ Show Figures 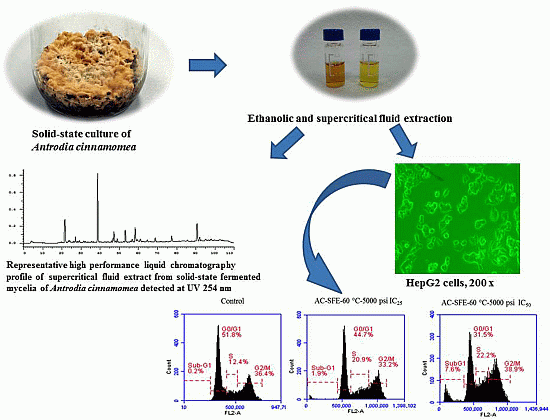