Effects of Taraxacum officinale on Fatigue and Immunological Parameters in Mice

In Korean herbal medicine dandelion (Taraxacum officinale, TO) has been used to improve energy levels and health. However, the effects of TO in experimental models remain unclear. We examined the anti-fatigue and immune-enhancing effects of TO in mice by performing a forced swimming test (FST) and in vitro by using peritoneal macrophages, respectively. After daily oral administration of TO, blood biochemical parameters related to fatigue were measured after the FST. FST immobility time was significantly decreased in the TO-treated group (100 mg/kg) on the tenth day. TO (10 and 100 mg/kg) treatment significantly increased glucose levels, acting as an energy source. The level of lactic dehydrogenase, which is an accurate indicator of muscle damage, tended to decline after TO administration (10 and 100 mg/kg). When TO (100 mg/kg) was orally administered to mice, blood urea nitrogen levels decreased significantly. We also examined the effect of TO on the production of cytokines and nitric oxide (NO) in mouse peritoneal macrophages. When TO was used in combination with recombinant interferon-gamma (rIFN-γ), a noticeable cooperative induction of tumor necrosis factor-alpha (TNF-α), interleukin (IL)-12p70, and IL-10 production was observed. Furthermore, in peritoneal macrophages, rIFN-γ plus TO treatment significantly increased the production of NO through inducible nitric oxide synthase (iNOS) induction. Taken together, these results suggest that TO improves fatigue-related indicators and immunological parameters in mice. View Full-Text
Keywords: Taraxacum officinale; forced swimming test; mouse peritoneal macrophage; cytokines; nitric oxide Taraxacum officinale; forced swimming test; mouse peritoneal macrophage; cytokines; nitric oxide
►▼ Show Figures 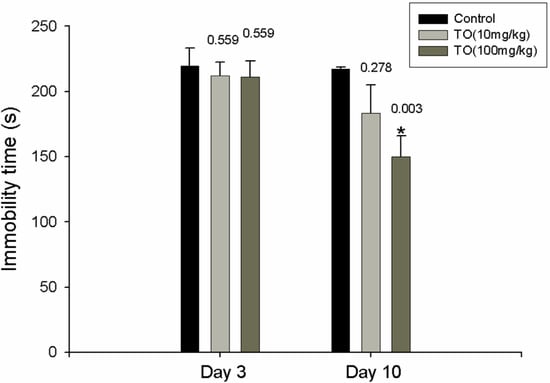