A New Class of Retrocausal Models
Next Article in Special Issue

In this work, three models based on Artificial Neural Network (ANN) were developed to describe the behavior for the inhibition corrosion of bronze in 3.5% NaCl + 0.1 M Na2SO4, using the experimental data of Electrochemical Impedance Spectroscopy (EIS). The database was divided into training, validation, and test sets randomly. The parameters process used as the inputs of the ANN models were frequency, temperature, and inhibitor concentration. The outputs for each ANN model and the components in the EIS spectrum (Zre, Zim, and Zmod) were predicted. The transfer functions used for the learning process were the hyperbolic tangent sigmoid in the hidden layer and linear in the output layer, while the Levenberg–Marquardt algorithm was applied to determine the optimum values of the weights and biases. The statistical analysis of the results revealed that ANN models for Zre, Zim, and Zmod can successfully predict the inhibition corrosion behavior of bronze in different conditions, where what was considered included variability in temperature, frequency, and inhibitor concentration. In addition, these three input parameters were keys to describe the behavior according to a sensitivity analysis. View Full-Text
Keywords: corrosion; bronze; ketoconazole; Electrochemical Impedance Spectroscopy (EIS); Artificial Neural Network (ANN) corrosion; bronze; ketoconazole; Electrochemical Impedance Spectroscopy (EIS); Artificial Neural Network (ANN)
►▼ Show Figures 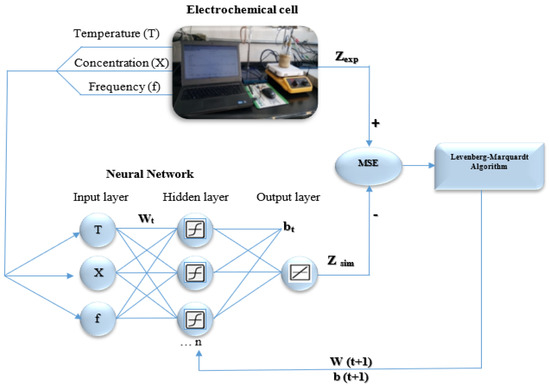