Molecular Phylogenetics of Trapezia Crabs in the Central Mexican Pacific

:
Benzophenones are UV-blockers found in most common sunscreens. The ability of Scyphozoan planula larvae of Cassiopea xamachana and C. frondosa to swim and complete metamorphosis in concentrations 0–228 µg/L benzophenone-3 (oxybenzone) was tested. Planulae of both species swam in erratic patterns, 25–30% slower, and experienced significant death (p < 0.05) in the highest concentrations of oxybenzone tested, whereas the larvae exhibited normal swimming patterns and no death in ≤2.28 µg/L oxybenzone. In addition, metamorphosis decreased 10–30% over 3 days for both species maintained in 228 µg/L oxybenzone. These effects do not involve symbiotic dinoflagellates, as planulae larvae of Cassiopea sp. are aposymbiotic. It is concluded that oxybenzone can have a detrimental impact on these jellyfish.
Keywords:
Cassiopea xamachana; C. frondosa; Scyphozoan; planulae; settlement; metamorphosis; oxybenzone

Benzophenones are organic compounds used in a variety of personal-care products for their abilities to absorb UV-B wavelengths coming from the sun. Oxybenzone avobenzone, octisalate, octocrylene, homosalate, and octinoxate are all used in conventional sunscreens and other topical, personal-care products to prevent damage from the sun’s UV rays. Between 6000 and 14,000 tons of sunscreen lotion, much of which contains between 1 and 10% benzophenone-3 (oxybenzone), are estimated to be released onto coral reef areas each year [1]. Concern over oxybenzone arose when a study reported that 1–2% was absorbed by the skin immediately after application [2]. Application to the epidermis is not the only mode for absorption. A German study reported traces of oxybenzone in breast milk of mammals e.g., [3]. Since oxybenzone is a photo-toxicant, its negative effects are activated and exacerbated by light [4]. Soon after reacting with light oxybenzone goes through rapid oxidation causing inactivation of antioxidants and a negative impact on the skin’s overall homeostasis [5]. Oxybenzone can induce photoactivated and non-photo-activated contact dermatitis, contact cheilitis, uticaria, and anaphylactoid allergic reactions e.g., [6]. In addition, oxybenzone, and other sunscreen chemicals, act to suppress the immune system [7].
Benzophenones put approximately 40% of coral reefs located along coastal areas, with at least 10% of reefs overall, at risk of exposure [1]. Oxybenzone has been found to cause environmental concerns such as bleaching of symbiotic dinoflagellates from corals [8,9], failure of larvae to settle [10], and increased mortality of corals [9,10,11] and fish [12,13]. Research has shown correlations between concentration of oxybenzone and deformation of symbiotic planulae from the coral Stylophora pistillata [4,14]. Oxybenzone has been identified as a phototoxicant, genotoxicant, and a skeletal endocrine disruptor in corals [4].
Hawaii State Legislature will ban the use of oxybenzone in sunscreens on 1 January 2021, due to significant damage to corals (bleaching) and deformation in the larvae [15,16]. The emergence of reef-safe sunscreens and beauty products are a step in the right direction to help reduce the amount of harmful chemicals in the water. Sunscreens with oxybenzone are also banned in Aruba, Bonaire, Key West, Palau, and in the US Virgin Islands.
The current experiments tested a variety of concentrations of oxybenzone on planulae larvae of the jellyfish Cassiopea xamachana and C. frondosa. These “up-side down” jellyfish are found in warm coastal areas of the world, including the mangrove and seagrass beds of South Florida, the Bahamas, and the Caribbean. The hypothesis is that the aposymbiotic planulae larvae of the jellyfish C. xamachama and C. frondosa (Figure 1) are negatively affected by exposure to oxybenzone.

Planulae larvae of C. xamachana and C. frondosa were collected from multiple female medusa from Florida Bay, Key Largo, Florida. The developing planulae were maintained in 100 μg/mL antibiotic solution of neomycin and streptomycin in filtered (0.8 μm) seawater; they were removed after hatching from the egg and placed in 35 ppt artificial seawater (ASW, Instant Ocean made in deionized (DI) water) containing no antibiotics. The oxybenzone solutions were prepared using pure oxybenzone (Benzophenone-3) powder solubilized in 5 µL of dimethyl sulfoxide (DMSO) solution and then diluted in ASW water to form stock and experimental solutions. Each concentration of oxybenzone used in experiments contained 5 µL/L DMSO. Oxybenzone has a very limited solubility in water, and even less so in seawater (some oxybenzone will come out of DMSO and float on the meniscus or adhere to the side walls of the container). Because of this, the concentration (molarity) in the dosing dishes was not known. Therefore, this experiment did not follow a validated methodology, but it does not detract from the observed dose-response toxicological behavior.
Swimming speed of planulae larvae was measured for 12 planulae in each concentration of oxybenzone. Four replicates (of 10–20 planulae per replicate) were used in the mortality experiments, and six replicates (of 10–20 planulae per replicate) were used in the settlement/metamorphosis experiments for each concentration of oxybenzone (228.0, 22.8, 2.28, 0.228, 0.0228, or 0.0 μg/L). All the experiments were conducted at 26–27 °C under indoor ambient light (20 µEsec−2h−1).
The larvae usually swam smoothly in a pattern following the circumference of the well. Using a stopwatch, the amount of time each larva took to swim the circumference, or for the treated larvae half the circumference, of the circular well was recorded. Larvae that did not swim around at least part of the circumference were not recorded. The number of larvae were counted in each well at the start of the mortality and settlement/metamorphosis experiments (0 h), and 1, 2, and 3 days after the start. Typical numbers ranged from 10–20 larvae per well. The difference between the number of larvae at the beginning of the experiment was compared the number at 1, 2, or 3 days to determine the number that died. Planulae usually disappear shortly after dying, with the single layer of cells in the epidermis and gastrodermis rapidly falling apart. The proportion of larvae swimming vs. those that had completed metamorphosis was monitored 1, 2, and 3 days after placing them in 100 μg/mL of the settlement inducer peptide Z-Gly-Pro-Gly-Gly-Pro-Ala-OH [16].
Proportions were arcsine square root transformed before statistical analysis. Data were tested for normality (Shapiro–Wilk test) and equal variance. The one-way ANOVA was used in parameteric tests with equal variance. When data did not meet the assumption of normality and homogeneity, a Kruskal-Wallis one-way ANOVA was used. A Tukey post-hoc test (95% confidence interval) followed. Differences were considered significant at p ≤ 0.05.

Oxybenzone has been found to damage and deform planulae larvae, which could explain why the motile skills of planulae larvae of C. xamachana and C. frondosa were partially inhibited (Figure 2) [4,14]. Larvae in higher concentrations of oxybenzone (228, 22.8 μg/L) were swimming in irregular patterns, some spun in circles in the same spot, and many of them died (Figure 3). The disorientation of the surviving larvae would most likely inhibit their ability to settle and metamorphose (Figure 4). Although the response of the two species is very similar, planulae of C. frondosa appear to be more sensitive to high concentrations of oxybenzone than C. xamachana (Figure 3 and Figure 4). Since there was no death in the control group of larvae, nor those maintained in 0.0228–2.28 μg/L oxybenzone, it appears that the low amount of DMSO used in the experiments did not detrimentally affect the planulae.
Planulae and newly metamorphosed scyphistomae (= polyps) are aposymbiotic in Cassiopea sp., unlike the normally symbiotic planulae of the coral Stylophora pistillata [4,14]. Many of the larval responses seen by Downs [4,14] were thought to be partially due to the effects on the symbiotic algae. Cassiopea sp. can acquire Symbiodiniaceae, soon after the new polyps develop a mouth. Therefore, Symbiodiniaceae were not involved in the responses of planulae larvae of Cassiopea sp. to oxybenzone. The symbionts enable the polyps of Cassiopea sp. to strobilate, turning into a medusa (Figure 1), although the mechanism of the symbiotic interaction is not known [17].
Sunscreens washed or flushed into the ocean during tourist season are probably having a negative effect on corals and jellyfish [18]. Downs et al. [14] found that the upper concentration varied in Hawaii (0.8–19.2 µg/L) and the US Virgin Islands (75–1400 µg/L), up to 6 times higher than the top concentration of oxybenzone used in the current experiments. The lethal concentration of oxybenzone that kills half of planulae of S. pistillata (LC50) in the light for an 8- and 24-h exposure was 3100 µg/L and 139 µg/L, respectively [14].
Planulae normally use their swimming ability to investigate substrates to settle on. Cassiopea xamachana and C. frondosa normally settle on specific substrates in their environment [19]. Oxybenzone can be attributed to the decreased motility and settlement/metamorphosis of C. xamachana and C. frondosa larvae, and even death at the higher concentrations used, posing a threat to the survival of these species. 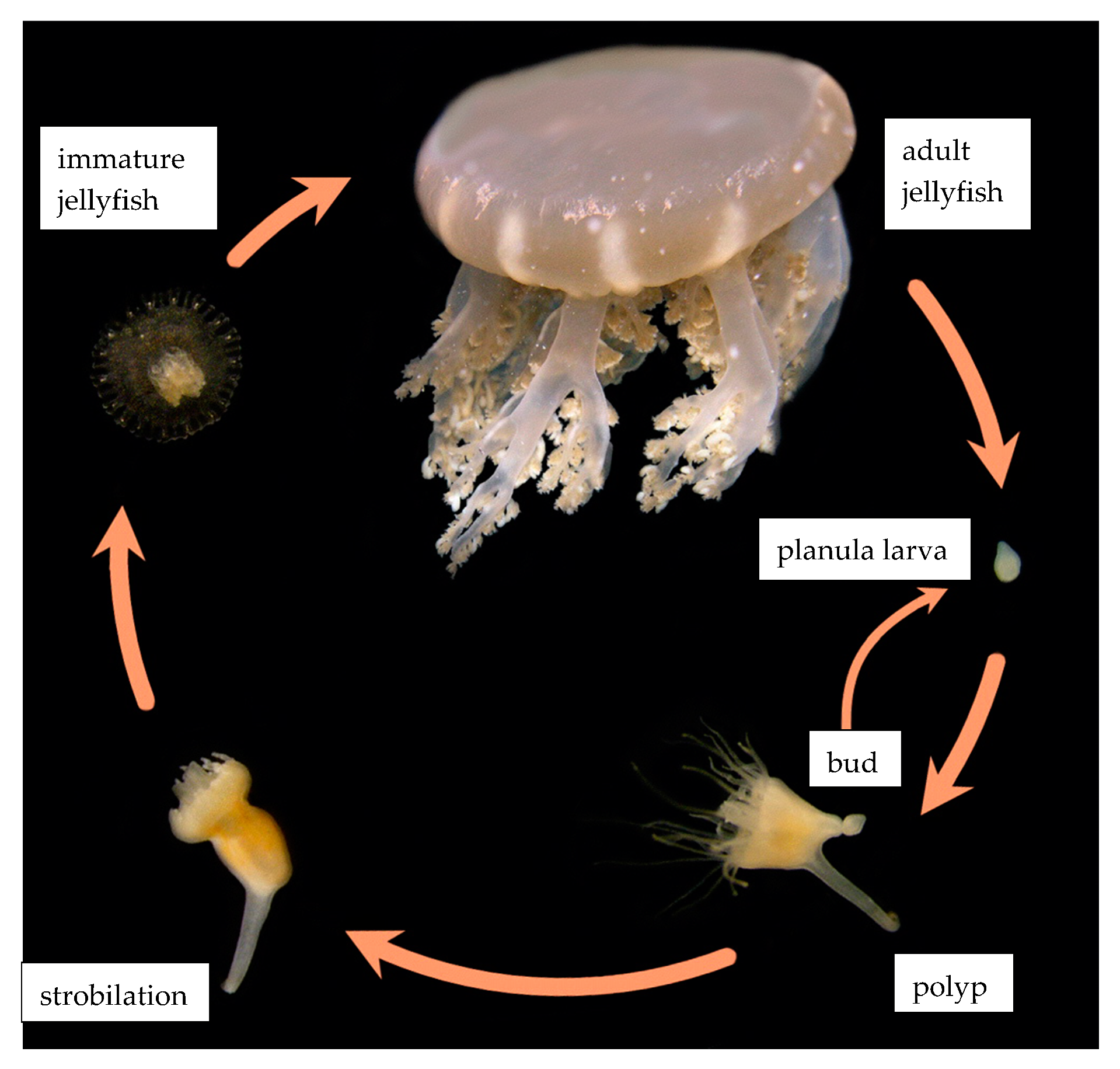 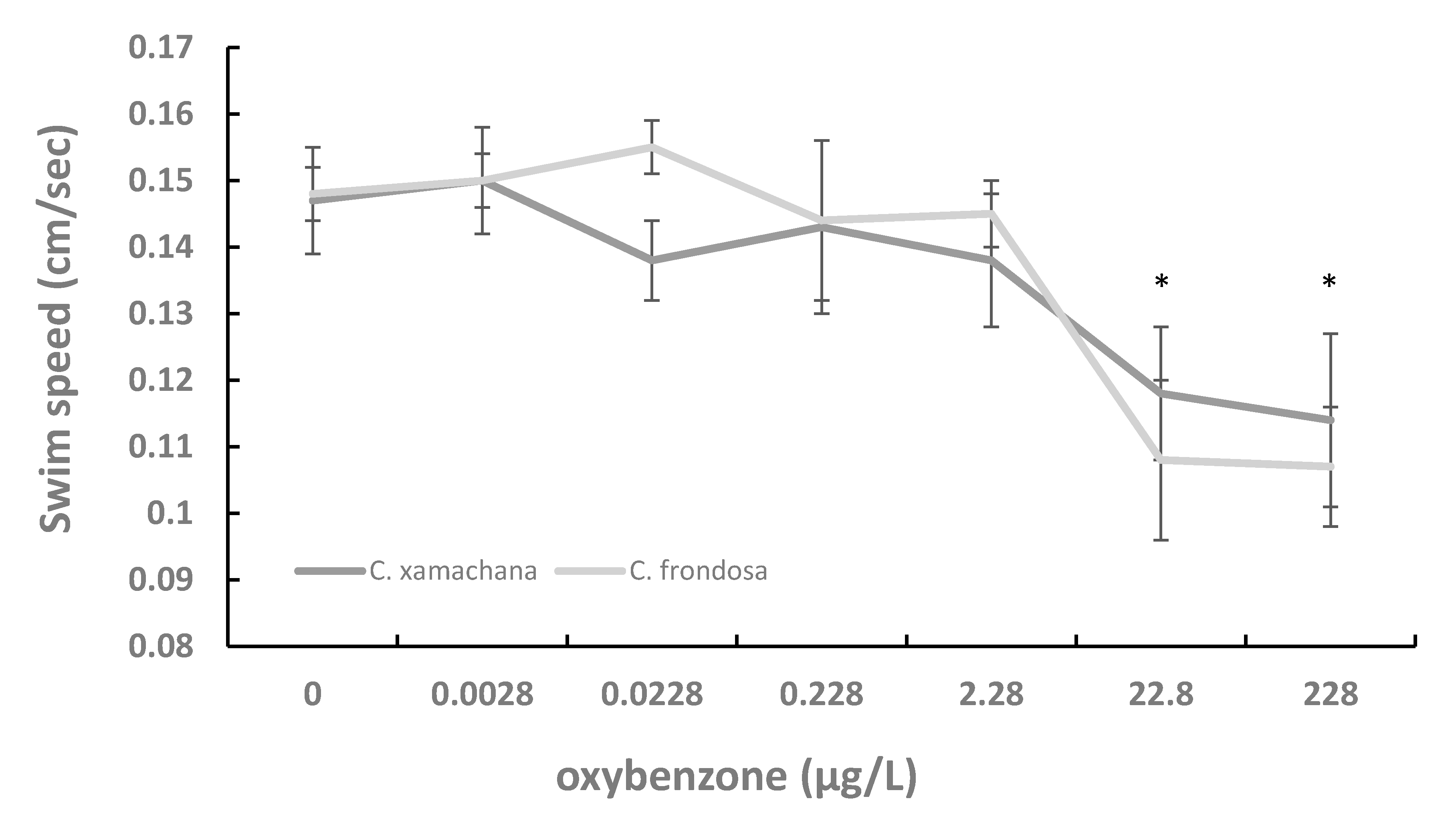 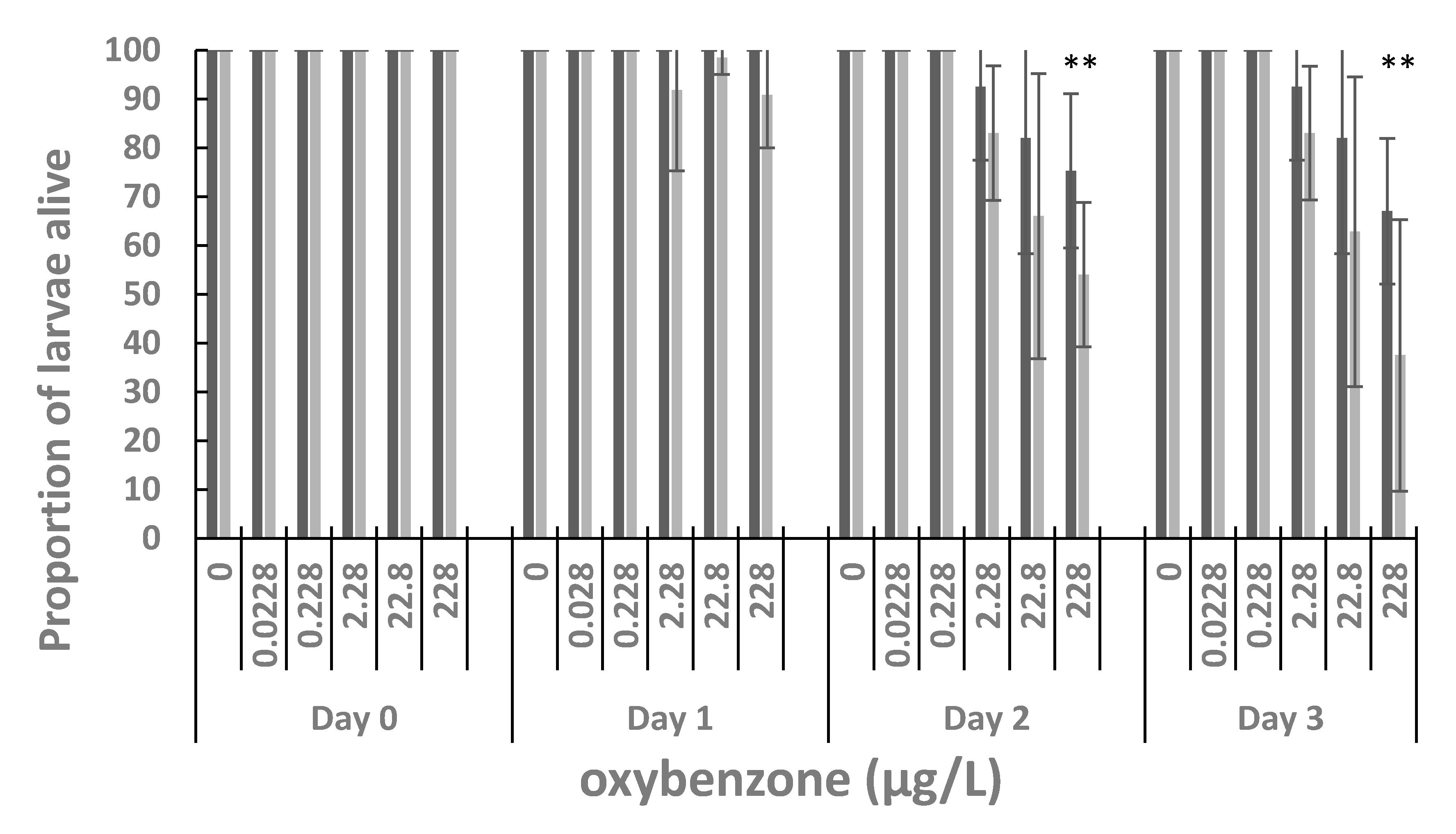 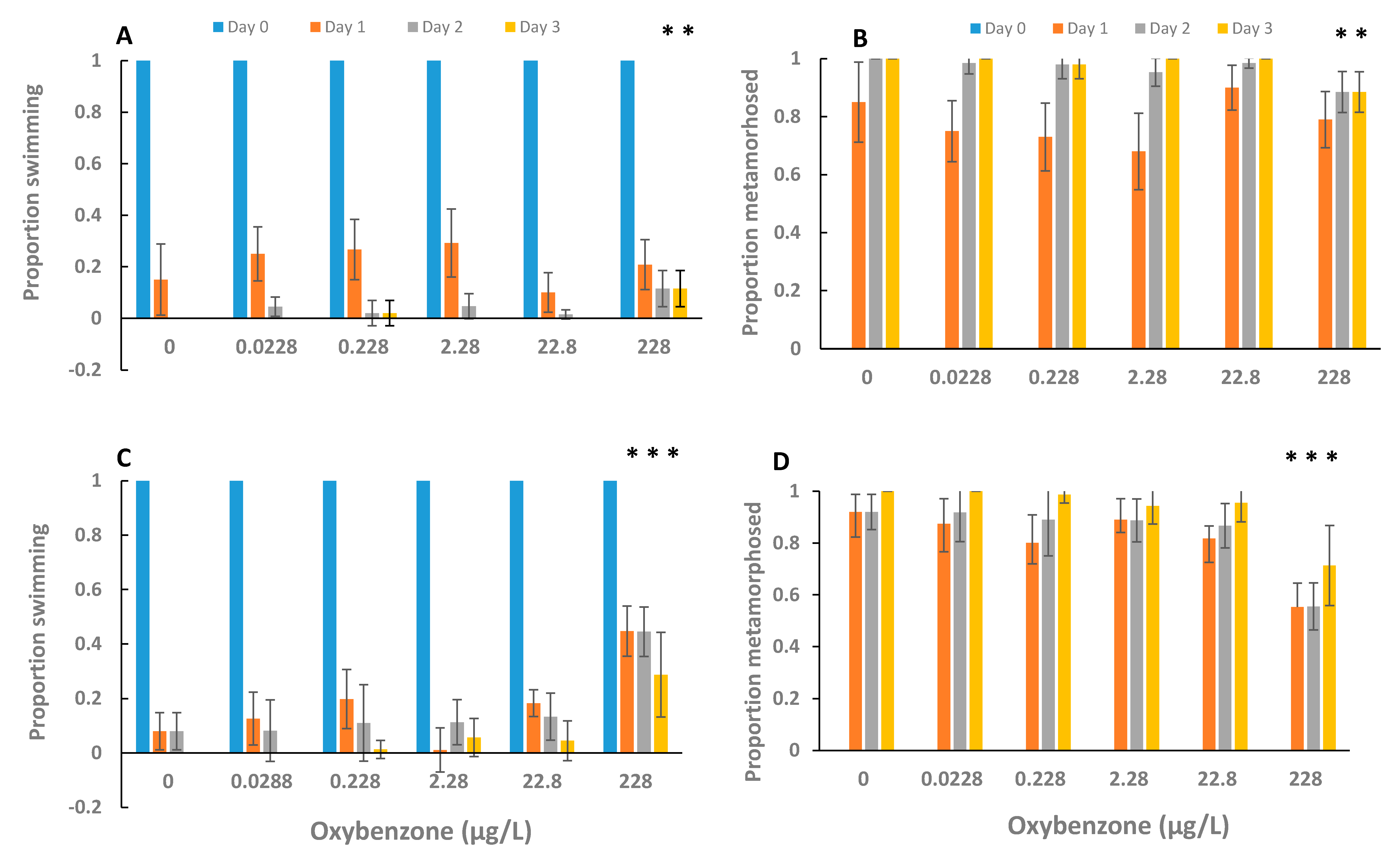