Origin and Circulation of Calcarenite Artifacts in the Area of Montescaglioso between 6th and 3rd Century BC: An Interdisciplinary Approach
Previous Article in Journal

Matera in Many Dimensions

Railroad Buildings of Eskişehir: Challenges and Opportunities for Industrial Heritage

Mehmet İnceoğlu
†
Department of Architecture, Eskişehir Technical University, Eskişehir 26155, Turkey
*
Author to whom correspondence should be addressed.
†
These authors contributed equally to this work.
Heritage 2019, 2(1), 435-451; https://doi.org/10.3390/heritage2010030
Received: 30 December 2018 / Revised: 21 January 2019 / Accepted: 27 January 2019 / Published: 30 January 2019
(This article belongs to the Special Issue Sharing and Discussion of Experiences and Approaches to Interpretation, Conservation and Management of Archaeological and Architectural Heritage)

While railways are considered as a sign of development for countries, the railway structures are part of the industrial heritage of cities and comprise some of the most important urban public places. In Turkey, the Eskişehir railway buildings, constructed between 1886 and 1894, are at the west of the main railroad between the Enveriye and Eskişehir stations. They are also public places having strong resonance in the collective memory. Because of the fast development in technology, they face the threat of losing their function. Conservation of former industrial structures requires, first and foremost, identifying and documenting the distinctive features that makes them cultural heritage sites. It is a shared responsibility between public institutions and sectors to identify and protect the distinguishing features of industrial heritage sites. With this awareness, at the Anadolu University Architecture Department, integrated student work focused on the Railroad Roundhouse—built in 1896—and Staff Housing Quarters—built in the early 20th century—which are part of this district and embody a series of urban problems, was carried out over four academic semesters. This study focuses on historic railway buildings in the Eskişehir railway district that is known for its urban problems. An exhibition combining these student works was opened at the Railcar Repair Facility on 16 November 2017. This exhibition showcased the student involvement in history of Eskişehir and increased public awareness of cultural heritage. View Full-Text
Keywords: industrial heritage; architectural conservation; railway buildings; Eskişehir; Turkey industrial heritage; architectural conservation; railway buildings; Eskişehir; Turkey
►▼ Show Figures 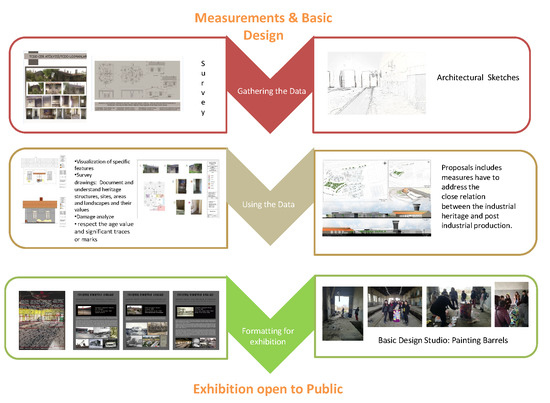