The framework of Quaternary permafrost in China was reconstructed for the first time on the basis of available periglacial, glacial, and other proxies. During the Early Pleistocene (2.68–0.80 Ma BP), permafrost advanced southwards to 47–50° N in northern China and possibly occurred in alpine regions in western China. During the Middle Pleistocene (800–130 ka BP), permafrost occurred extensively on the Qinghai-Tibet Plateau (QTP) and in alpine or mountainous regions of northern, western, central, and northeastern China. The Great Interglacial occurred afterward and before the Last Glaciation, but the evidence of permafrost for this period has been seldom found. Permafrost evolution of the Last Glaciation (72–19 ka BP) in China is divided into: Expansion (72~50 ka BP), degradation (50–26 ka BP), and intensive expansion during the Last Permafrost Maximum (LPMax, 26–19 ka BP) with a permafrost extent of 5.3 × 106~5.4 × 106 km2, and when major features of present permafrost took shape. Permafrost fluctuated during the Younger Dryas (12.9–11.7 ka BP). Since the Holocene, permafrost in China expanded and retreated to lesser extents, forming the current permafrost environment. The Holocene evolution of permafrost was divided into: Unstable climate but stable permafrost during the early Holocene (11.7~8.5–7.0 ka BP); permafrost degradation during the Last Permafrost Minimum (LPMin, or the Holocene Megathermal; 8.5–7.0~4.0–3.0 ka BP) and the Medieval Warm Period (MWP; 1.0~0.5 ka BP); permafrost expansion during the Neoglaciation (4.0–3.0~1.0 ka BP) and the Little Ice Age (LIA; 0.5~0.1 ka BP); and recent permafrost degradation (20th century to the present). However, this review paper only provides the framework of Quaternary permafrost in China and some preliminary discussions. Many key questions await further investigations. View Full-Text
Keywords: permafrost evolution; periglacial remains; climate changes; permafrost extent; China permafrost evolution; periglacial remains; climate changes; permafrost extent; China
►▼ Show Figures 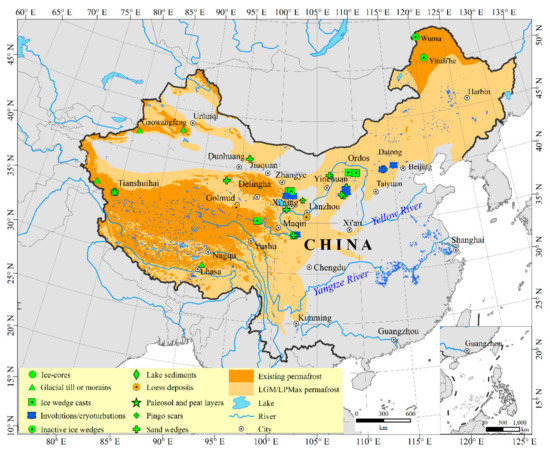