In Africa, pathogens transmitted by ticks are of major concern in livestock production and human health. Despite noticeable improvements particularly of molecular screening methods, their widespread availability and the detection of multiple infections remain challenging. Hence, we developed a universally accessible and robust tool for the detection of bacterial pathogens and piroplasmid parasites of cattle. A low-cost and low-density chip DNA microarray kit (LCD-Array) was designed and tested towards its specificity and sensitivity for five genera causing tick-borne diseases. The blood samples used for this study were collected from cattle in Northern Cameroon. Altogether, 12 species of the genera Anaplasma, Ehrlichia, Rickettsia and Theileria, and their corresponding genus-wide probes including Babesia were tested on a single LCD-Array. The detection limit of plasmid controls by PCR ranged from 1 to 75 copies per µL depending on the species. All sequenced species hybridized on the LCD-Array. As expected, PCR, agarose gel electrophoresis and Sanger sequencing found significantly less pathogens than the LCD-Array (p < 0.001). Theileria and Rickettsia had lower detection limits than Anaplasma and Ehrlichia. The parallel identification of some of the most detrimental tick-borne pathogens of livestock, and the possible implementation in small molecular-diagnostic laboratories with limited capacities makes the LCD-Array an appealing asset. View Full-Text
Keywords: tick-borne pathogen; low-cost and low-density-array; Reverse Line Blot; Anaplasma; Ehrlichia; Rickettsia; Theileria tick-borne pathogen; low-cost and low-density-array; Reverse Line Blot; Anaplasma; Ehrlichia; Rickettsia; Theileria
►▼ Show Figures 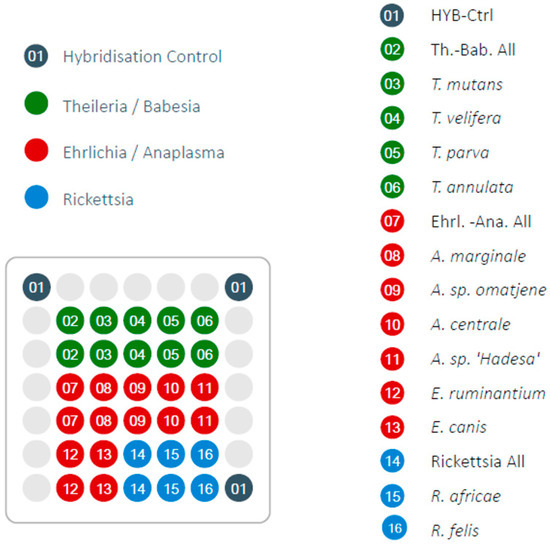 Abanda, B.; Paguem, A.; Achukwi, M.D.; Renz, A.; Eisenbarth, A. Development of a Low-Density DNA Microarray for Detecting Tick-Borne Bacterial and Piroplasmid Pathogens in African Cattle. Trop. Med. Infect. Dis. 2019, 4, 64.


Abanda B, Paguem A, Achukwi MD, Renz A, Eisenbarth A. Development of a Low-Density DNA Microarray for Detecting Tick-Borne Bacterial and Piroplasmid Pathogens in African Cattle. Tropical Medicine and Infectious Disease. 2019; 4(2):64.