The Health Effects of Strongyloidiasis on Pregnant Women and Children: A Systematic Literature Review
Previous Article in Special Issue

Melioidosis in Bangladesh: A Clinical and Epidemiological Analysis of Culture-Confirmed Cases

Despite the fact that South Asia is predicted to have the highest number of cases worldwide, melioidosis is a little-known entity in South Asian countries. It has never been heard of by the majority of doctors and has as yet failed to gain the attention of national Ministries of Health and country offices of the World Health Organization (WHO). Although a few centers are diagnosing increasing numbers of cases, and the mortality documented from these institutions is relatively high (nearly 20%), the true burden of the disease remains unknown. In India, most cases have been reported from southwestern coastal Karnataka and northeastern Tamil Nadu, although this probably simply reflects the presence of centers of excellence and researchers with an interest in the disease. As elsewhere, the majority of cases have type 2 diabetes mellitus and occupational exposure to the environment. Most present with community-acquired pneumonia and/or bacteremia, especially during heavy rainfall. The high seropositivity rate (29%) in Karnataka and isolation of B. pseudomallei from the environment in Tamil Nadu and Kerala confirm India as melioidosis-endemic, although the full extent of the distribution of the organism across the country is unknown. There are limited molecular epidemiological data, but, thus far, the majority of Indian isolates have appeared distinct from those from South East Asia and Australia. Among other South Asian countries, Sri Lanka and Bangladesh are known to be melioidosis-endemic, but there are no cases that have conclusively proved to have been acquired in Nepal, Bhutan, Afghanistan or Pakistan. There are no surveillance systems in place for melioidosis in South Asian countries. However, over the past two years, researchers at the Center for Emerging and Tropical Diseases of Kasturba Medical College, University of Manipal, have established the Indian Melioidosis Research Forum (IMRF), held the first South Asian Melioidosis Congress, and have been working to connect researchers, microbiologists and physicians in India and elsewhere in South Asia to raise awareness through training initiatives, the media, workshops, and conferences, with the hope that more patients with melioidosis will be diagnosed and treated appropriately. However, much more work needs to be done before we will know the true burden and distribution of melioidosis across South Asia. View Full-Text
Keywords: Burkholderia pseudomallei; India; melioidosis; South Asia Burkholderia pseudomallei; India; melioidosis; South Asia
►▼ Show Figures 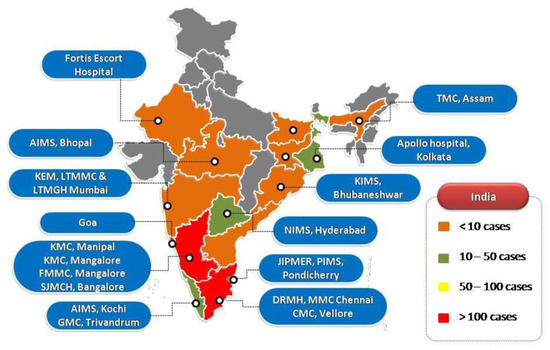