Virtual Reality and Games
Next Article in Special Issue

Design for Motivation: Evaluation of a Design Tool
Previous Article in Special Issue

Reflection through Inner Presence: A Sensitising Concept for Design

Designing for Embodied Being-in-the-World: A Critical Analysis of the Concept of Embodiment in the Design of Hybrids

This paper critically explores what it means to Design for Embodied Being-in-the-world (D4EB). It aims to uncover what this perspective means for designing hybrids, the new interactive physical-digital artefacts developed in wearable, tangible and ubiquitous computing and augmented reality. D4EB is contrasted with the principle of embodied representation, applied for example in designing tangible interfaces between users and digital information. In contrast, D4EB starts from our phenomenological ‘being-in-the-world’. Hybrids are conceived as participating in socially situated, sensorimotor couplings that govern the way the lived body operates in the lifeworld. D4EB rejects conceptual dualisms between the (representational) mind and the (physical) body and between (inner) mind and (outside) world. To illustrate its core principles, three design cases are presented. The cases are part of ongoing design-research that formed the basis for the framework. D4EB is further discussed in relation to personal identity, the role of external representations and the role of the designer. D4EB promises to open up a theoretically informed, largely unexplored design space, which can help designers utilize the full power of hybrid technologies. Hybrids may be designed to support people in their embodied being by sustaining, enriching and generating new ways of attuning to the lifeworld. View Full-Text
Keywords: embodiment; design; being-in-the-world; sense-making; lifeworld; embodied interaction; affordance; hybrids; tangible interaction; ubiquitous computing embodiment; design; being-in-the-world; sense-making; lifeworld; embodied interaction; affordance; hybrids; tangible interaction; ubiquitous computing
►▼ Show Figures 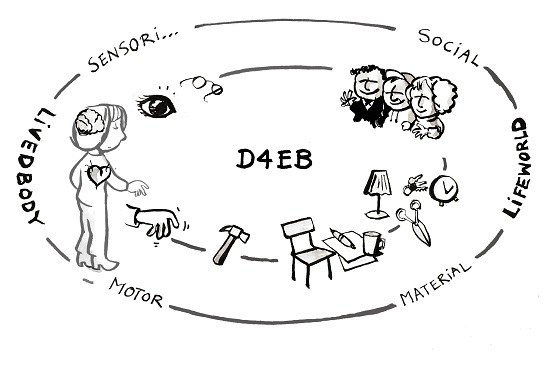 
Van Dijk J. Designing for Embodied Being-in-the-World: A Critical Analysis of the Concept of Embodiment in the Design of Hybrids. Multimodal Technologies and Interaction. 2018; 2(1):7. https://doi.org/10.3390/mti2010007