Superconductivity in 122-Type Pnictides without Iron

While the ultrastructure of myelin is considered a quasi-crystalline stable system, nowadays its multiscale complex dynamics appear to play a key role in its functionality, degeneration and repair processes following neurological diseases and trauma. In this work, we investigated the fluctuation of the myelin supramolecular assembly by measuring the spatial distribution of orientation fluctuations of axons in a Xenopus Laevis sciatic nerve associated with nerve functionality. To this end, we used scanning micro X-ray diffraction (SμXRD), a non-invasive technique that has already been applied to other heterogeneous systems presenting complex geometries from microscale to nanoscale. We found that the orientation of the spatial fluctuations of fresh axons show a Levy flight distribution, which is a clear indication of correlated disorder. We found that the Levy flight distribution was missing in the aged nerve prepared in an unfresh state. This result shows that the spatial distribution of axon orientation fluctuations in unfresh nerve state loses the correlated disorder and assumes a random disorder behavior. This work provides a deeper understanding of the ultrastructure-function nerve relation and paves the way for the study of other materials and biomaterials using the SμXRD technique to detect fluctuations in their supramolecular structure. View Full-Text
Keywords: scanning micro X-ray diffraction; myelin sheath; Levy distribution; correlated disorder; axon fluctuation scanning micro X-ray diffraction; myelin sheath; Levy distribution; correlated disorder; axon fluctuation
►▼ Show Figures 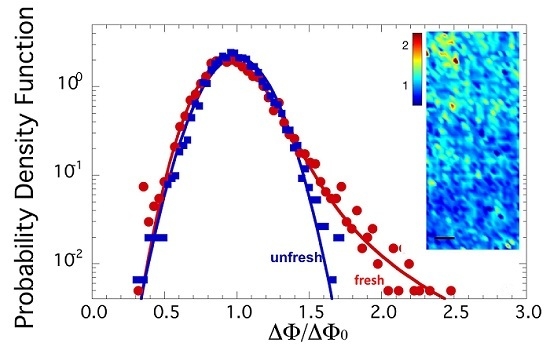