Shark skin has for many years inspired engineers to produce biomimetic structures reducing surface drag or acting as an anti-fouling layer. Both effects are presumed to be consequences of the structure of shark skin that is composed of arrays of so-called dermal denticles. However, the understanding of the full functional role of the dermal denticles is still a topic of research. We report optical microscopy and scanning electron microscopy of dermal denticles from three slowly swimming shark species for which the functional role of the dermal denticles is suggested as one of defense (possibly understood as anti-fouling) and/or abrasion strength. The three species are Greenland shark (Somnosius microcephalus), small-spotted catshark (Scyliorhinus canicula) and spiny dogfish (Squalus acanthias). Samples were taken at over 30 different positions on the bodies of the sharks. In addition, we demonstrate that the flow pattern near natural shark skin can be measured by micro-PIV (particle image velocimetry). The microfluidic experiments are complemented by numerical flow simulations. Both visualize unsteady flow, small eddies, and recirculation bubbles behind the natural dermal denticles. View Full-Text
Keywords: shark skin; micro-PIV; microfluidics shark skin; micro-PIV; microfluidics
►▼ Show Figures 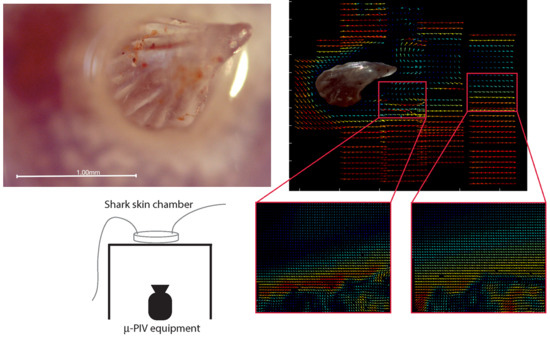