Evaluation of Electrostatic Spraying Equipment in a Greenhouse Pepper Crop

The interest in cultivation of vegetable soybeans, also known as edamame, in the North Europe region has increased during the last years due to their high nutritional value and excellent taste properties. During the last decade the possible growing area for soybeans has expanded towards the north due to changes in climate as well as breeding efforts. In order to adopt vegetable soybean growing technology for commercial cultivation in the North Europe region, independent experiments were carried out in Latvia and Norway. This study shows that vegetable soybean is a crop with potential for successful cultivation at higher latitudes, such as the Nordic–Baltic region in North Europe, with yield levels comparable to other regions of the world. We observed that hydrothermal conditions had the most significant impact on soybean plant development. Sowing or planting as early as possible is a key to obtaining sufficient yield levels. In the study, the vegetation period needed to be at least 123 to 127 days, with growing degree days (GDD) at least 650, and hydrothermal coefficient (HTC) above 1. Under such conditions, the obtained marketable yield in Latvia ranged between 3 to 10 t ha−1 during the period of 2017–2019, and 1.2 to 10.5 t ha−1 in Norway. Planting density of 20–25 plants per m2 appeared to be optimal. The variety ‘Midori Giant’ showed the most stable yield outcome, but ‘Chiba Green’ also gave a satisfactory yield. View Full-Text
Keywords: edamame; Glycine max L.; hydrothermal conditions; growing degree days edamame; Glycine max L.; hydrothermal conditions; growing degree days
►▼ Show Figures 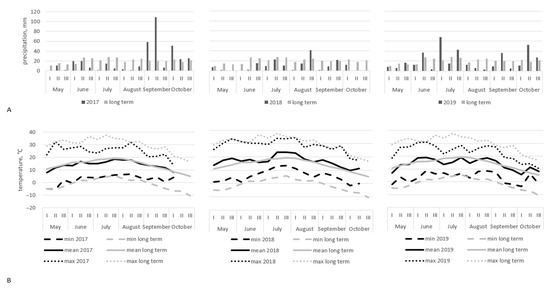