A char produced from spent tire rubber showed very promising results as an adsorbent of Remazol Yellow (RY) from aqueous solutions. Spent tire rubber was submitted to a pyrolysis process optimized for char production. The obtained char was submitted to chemical, physical, and textural characterizations and, subsequently, applied as a low-cost adsorbent for dye (RY) removal in batch adsorption assays. The obtained char was characterized by relatively high ash content (12.9% wt), high fixed-carbon content (69.7% wt), a surface area of 69 m2/g, and total pore volume of 0.14 cm3/g. Remazol Yellow kinetic assays and modelling of the experimental data using the pseudo-first and pseudo-second order kinetic models demonstrated a better adjustment to the pseudo-first order model with a calculated uptake capacity of 14.2 mg RY/g char. From the equilibrium assays, the adsorption isotherm was fitted to both Langmuir and Freundlich models; it was found a better fit for the Langmuir model to the experimental data, indicating a monolayer adsorption process with a monolayer uptake capacity of 11.9 mg RY/g char. Under the experimental conditions of the adsorption assays, the char presented positive charges at its surface, able to attract the deprotonated sulfonate groups (SO3−) of RY; therefore, electrostatic attraction was considered the most plausible mechanism for dye removal. View Full-Text
Keywords: tire rubber; char; dye; adsorption tire rubber; char; dye; adsorption
►▼ Show Figures 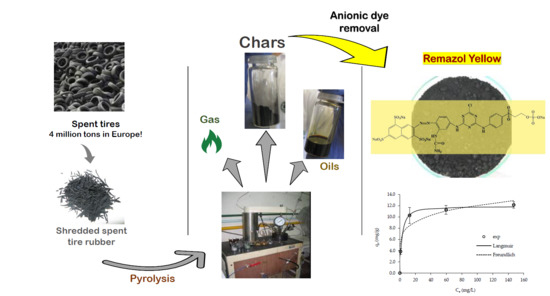