Rezafungin—Mechanisms of Action, Susceptibility and Resistance: Similarities and Differences with the Other Echinocandins

Rezafungin (formerly CD101) is a new β-glucan synthase inhibitor that is chemically related with anidulafungin. It is considered the first molecule of the new generation of long-acting echinocandins. It has several advantages over the already approved by the Food and Drug Administration (FDA) echinocandins as it has better tissue penetration, better pharmacokinetic/phamacodynamic (PK/PD) pharmacometrics, and a good safety profile. It is much more stable in solution than the older echinocandins, making it more flexible in terms of dosing, storage, and manufacturing. These properties would allow rezafungin to be administered once-weekly (intravenous) and to be potentially administered topically and subcutaneously. In addition, higher dose regimens were tested with no evidence of toxic effect. This will eventually prevent (or reduce) the selection of resistant strains. Rezafungin also has several similarities with older echinocandins as they share the same in vitro behavior (very similar Minimum Inhibitory Concentration required to inhibit the growth of 50% of the isolates (MIC50) and half enzyme maximal inhibitory concentration 50% (IC50)) and spectrum, the same target, and the same mechanisms of resistance. The selection of FKS mutants occurred at similar frequency for rezafungin than for anidulafungin and caspofungin. In this review, rezafungin mechanism of action, target, mechanism of resistance, and in vitro data are described in a comparative manner with the already approved echinocandins. View Full-Text
Keywords: rezafungin; CD101; antifungal susceptibility; mechanism of action; mechanism of resistance; literature review rezafungin; CD101; antifungal susceptibility; mechanism of action; mechanism of resistance; literature review
►▼ Show Figures 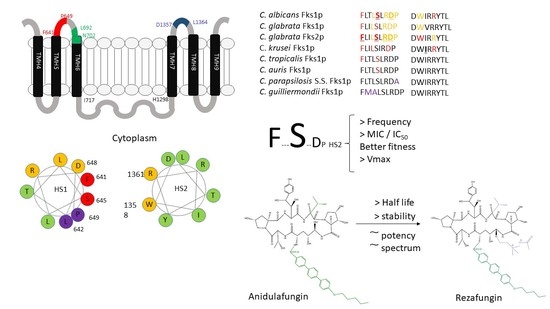 Garcia-Effron, G. Rezafungin—Mechanisms of Action, Susceptibility and Resistance: Similarities and Differences with the Other Echinocandins. J. Fungi 2020, 6, 262. https://doi.org/10.3390/jof6040262


Garcia-Effron G. Rezafungin—Mechanisms of Action, Susceptibility and Resistance: Similarities and Differences with the Other Echinocandins. Journal of Fungi. 2020; 6(4):262. https://doi.org/10.3390/jof6040262


Garcia-Effron, Guillermo. 2020. "Rezafungin—Mechanisms of Action, Susceptibility and Resistance: Similarities and Differences with the Other Echinocandins" Journal of Fungi 6, no. 4: 262. https://doi.org/10.3390/jof6040262