Spontaneous Left Cardiac Isomerism in Chick Embryos: Case Report, Review of the Literature, and Possible Significance for the Understanding of Ventricular Non-Compaction Cardiomyopathy in the Setting of Human Heterotaxy Syndromes

The outer shape of most vertebrates is normally characterized by bilateral symmetry. The inner organs, on the other hand, are normally arranged in bilaterally asymmetric patterns. Congenital deviations from the normal organ asymmetry can occur in the form of mirror imagery of the normal arrangement (situs inversus), or in the form of arrangements that have the tendency for the development of bilateral symmetry, either in a pattern of bilateral left-sidedness (left isomerism) or bilateral right-sidedness (right isomerism). The latter two forms of visceral situs anomalies are called “heterotaxy syndromes”. During the past 30 years, remarkable progress has been made in uncovering the genetic etiology of heterotaxy syndromes. However, the pathogenetic mechanisms causing the spectrum of cardiovascular defects found in these syndromes remain poorly understood. In the present report, a spontaneous case of left cardiac isomerism found in an HH-stage 23 chick embryo is described. The observations made in this case confirmed the existence of molecular isomerism in the ventricular chambers previously noted in mouse models. They, furthermore, suggest that hearts with left cardiac isomerism may have the tendency for the development of non-compaction cardiomyopathy caused by defective development of the proepicardium. View Full-Text
Keywords: heterotaxy syndromes; cardiac isomerism; chick embryo; Pitx2; proepicardium; non-compaction cardiomyopathy heterotaxy syndromes; cardiac isomerism; chick embryo; Pitx2; proepicardium; non-compaction cardiomyopathy
►▼ Show Figures 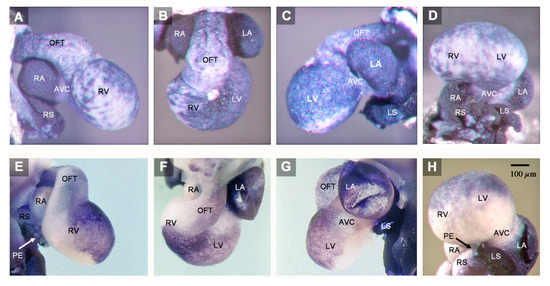 
Männer J. Spontaneous Left Cardiac Isomerism in Chick Embryos: Case Report, Review of the Literature, and Possible Significance for the Understanding of Ventricular Non-Compaction Cardiomyopathy in the Setting of Human Heterotaxy Syndromes. Journal of Cardiovascular Development and Disease. 2019; 6(4):40.