A Multi-Factor Analysis of Forecasting Methods: A Study on the M4 Competition
Previous Article in Journal

Carbon monoxide (CO) is an air pollutant commonly formed during natural and anthropogenic processes involving incomplete combustion. Much less is known about biological CO production during the decomposition of the organic fraction (OF), especially originating from municipal solid waste (MSW), e.g., during the aerobic biostabilization (AB) process. In this dataset, we summarized the temperature and the content of process gases (including rarely reported carbon monoxide, CO) generated inside full-scale AB of an organic fraction of municipal solid waste (OFMSW) reactor. The objective of the study was to present the data of the fluctuation of CO content as well as that of O2, CO2, and CH4 in process gas within the waste pile, during the AB of the OFMSW. The OFMSW was aerobically biostabilized in six reactors, in which the technological regimes of AB were dependent on process duration (42–69 days), waste mass (391.02–702.38 Mg), the intensity of waste aeration (4.4–10.7 m3·Mg−1·h−1), reactor design (membrane-covered reactor or membrane-covered reactor with sidewalls) and thermal conditions in the reactor (20.2–77.0 °C). The variations in the degree of waste aeration (O2 content), temperature, and fluctuation of CO, CO2, and CH4 content during the weekly measurement intervals were summarized. Despite a high O2 content in all reactors and stable thermal conditions, the presence of CO in process gas was observed, which suggests that ensuring optimum conditions for the process is not sufficient for CO emissions to be mitigated. In the analyzed experiment, CO concentration was highly variable over the duration of the process, ranging from a few to over 1,500 ppm. The highest concentration of CO was observed between the second and fifth weeks of the test. The reactor B2 was the source of the highest CO production and average highest temperature. This study suggests that the highest CO productions occur at the highest temperature, which is why the authors believe that CO production has thermochemical foundations. View Full-Text
Keywords: aeration rate; aerobic biostabilization; carbon monoxide; organic fraction; municipal solid waste; GHG emission; semipermeable membranes aeration rate; aerobic biostabilization; carbon monoxide; organic fraction; municipal solid waste; GHG emission; semipermeable membranes
►▼ Show Figures 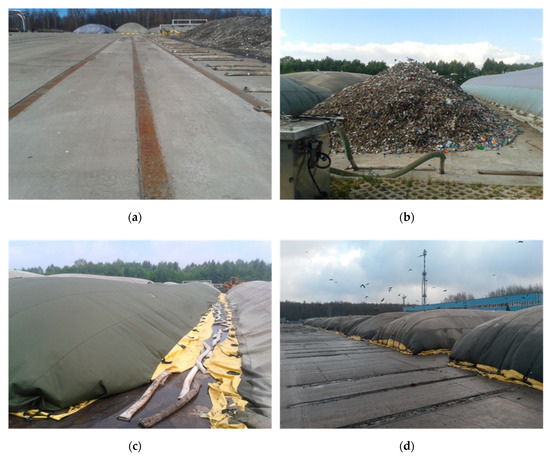