Natural Cities Generated from All Building Locations in America

The widespread use of smartphones has dictated a new paradigm, where mobile applications are the primary channel for dealing with day-to-day tasks. This paradigm is full of sensitive information, making security of utmost importance. To that end, and given the traditional authentication techniques (passwords and/or unlock patterns) which have become ineffective, several research efforts are targeted towards biometrics security, while more advanced techniques are considering continuous implicit authentication on the basis of behavioral biometrics. However, most studies in this direction are performed “in vitro” resulting in small-scale experimentation. In this context, and in an effort to create a solid information basis upon which continuous authentication models can be built, we employ the real-world application “BrainRun”, a brain-training game aiming at boosting cognitive skills of individuals. BrainRun embeds a gestures capturing tool, so that the different types of gestures that describe the swiping behavior of users are recorded and thus can be modeled. Upon releasing the application at both the “Google Play Store” and “Apple App Store”, we construct a dataset containing gestures and sensors data for more than 2000 different users and devices. The dataset is distributed under the CC0 license and can be found at the EU Zenodo repository. View Full-Text
Keywords: continuous implicit authentication; mobile security; behavioral biometrics continuous implicit authentication; mobile security; behavioral biometrics
►▼ Show Figures 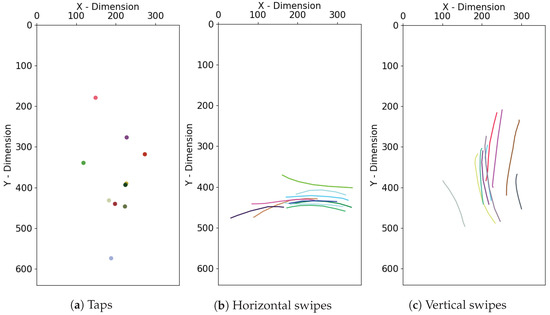