In order to predict and control the impacts of floods in torrents, it is important to verify the simulation accuracy of the most used hydrological models. The performance verification is particularly needed for applications in watersheds with peculiar climatic and geomorphological characteristics, such as the Mediterranean torrents. Moreover, in addition to the accuracy, other factors affect the choice of software by stakeholders (users, modellers, researchers, etc.). This study introduces a “performance matrix”, consisting of several evaluation parameters weighted by stakeholders’ opinions. The aim is to evaluate the accuracy of the flood prediction which is achieved by different models, as well as the pros and cons of software user experience. To this aim, the performances and requisites of four physical-based and conceptual models (HEC-HMS, SWMM, MIKE11 NAM and WEC-FLOOD) have been evaluated, by predicting floods in a midsized Mediterranean watershed (Mèsima torrent, Calabria, Southern Italy). In the case study, HEC-HMS and MIKE 11 NAM were the best computer models (with a weighted score of 4.45 and 4.43, respectively), thanks to their low complexity and computation effort, as well as good user interface and prediction accuracy. However, MIKE11 NAM is not free of charge. SWMM showed a lower prediction accuracy, which put the model in third place of the four models. The performance of WEC-FLOOD, although not being as good as for the other tested models, can be considered overall acceptable in comparison to the other well-consolidated models, considering that WEC-FLOOD is in the early stage of development. Overall, the proposal of the performance matrix for hydrological models may represent a first step in building a more complete evaluation framework of the hydrological and hydraulic commercial models, in order to give indications to allow potential users to make an optimal choice. View Full-Text
Keywords: surface runoff; SCS-CN method; Horton method; rainfall–runoff transformation; calibration; validation; HEC-HMS; MIKE11 NAM; SWMM; WEC-FLOOD surface runoff; SCS-CN method; Horton method; rainfall–runoff transformation; calibration; validation; HEC-HMS; MIKE11 NAM; SWMM; WEC-FLOOD
►▼ Show Figures 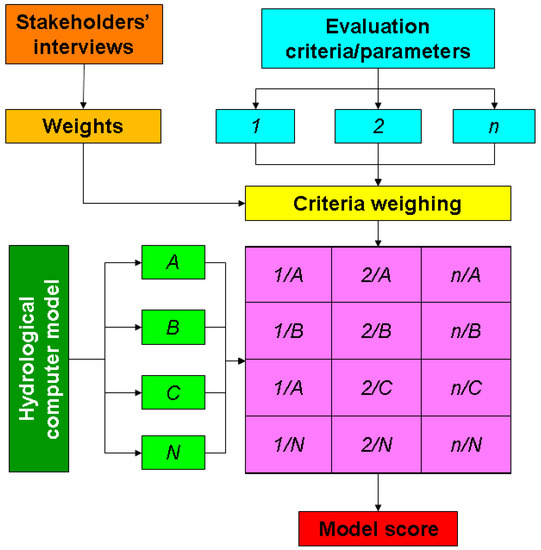