Asparagus Roots: From an Agricultural By-Product to a Valuable Source of Fructans
Previous Article in Journal

Lignocellulose-Degrading Enzymes: A Biotechnology Platform for Ferulic Acid Production from Agro-Industrial Side Streams

Biorefining by enzymatic hydrolysis (EH) of lignocellulosic waste material due to low costs and affordability has received enormous interest amongst scientists as a potential strategy suitable for the production of bioactive ingredients and chemicals. In this study, a sustainable and eco-friendly approach to extracting bound ferulic acid (FA) was demonstrated using single-step EH by a mixture of lignocellulose-degrading enzymes. For comparative purposes of the efficiency of EH, an online extraction and analysis technique using supercritical fluid extraction–supercritical fluid chromatography–mass spectrometry (SFE-SFC-MS) was performed. The experimental results demonstrated up to 369.3 mg 100 g−1 FA release from rye bran after 48 h EH with Viscozyme L. The EH of wheat and oat bran with Viscoferm for 48 h resulted in 255.1 and 33.5 mg 100 g−1 of FA, respectively. The release of FA from bran matrix using supercritical fluid extraction with carbon dioxide and ethanol as a co-solvent (SFE-CO2-EtOH) delivered up to 464.3 mg 100 g−1 of FA, though the extractability varied depending on the parameters used. The 10-fold and 30-fold scale-up experiments confirmed the applicability of EH as a bioprocessing method valid for the industrial scale. The highest yield of FA in both scale-up experiments was obtained from rye bran after 48 h of EH with Viscozyme L. In purified extracts, the absence of xylose, arabinose, and glucose as the final degradation products of lignocellulose was proven by high-performance liquid chromatography with refractive index detection (HPLC-RID). Up to 94.0% purity of FA was achieved by solid-phase extraction (SPE) using the polymeric reversed-phase Strata X column and 50% EtOH as the eluent. View Full-Text
Keywords: biorefining; bran; enzymatic hydrolysis; green extraction; hydroxycinnamates; sustainability; valorization biorefining; bran; enzymatic hydrolysis; green extraction; hydroxycinnamates; sustainability; valorization
►▼ Show Figures 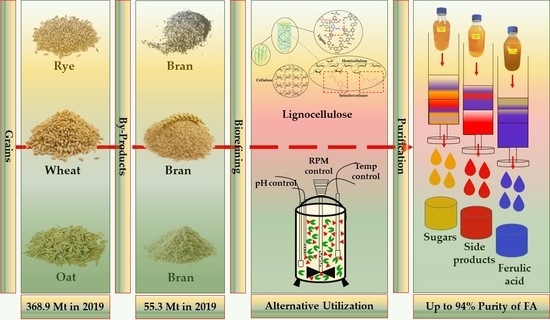