Attachment and the Development of Moral Emotions in Children and Adolescents: A Systematic Review
Previous Article in Journal

Characteristics of Kawasaki Disease Patients during the COVID-19 Pandemic in Japan: A Single-Center, Observational Study

Toys in the Playrooms of Children’s Hospitals: A Potential Source of Nosocomial Bacterial Infections?

Pediatric patients are more susceptible and vulnerable to nosocomial infections, in part because of their nascent and developing immune system and in part due to certain congenital conditions. Consequently, we found limited literature that investigated and reported children’s toys in hospital playrooms as potential reservoirs of pathogenic microbes. Hence, in the present study, we aimed to investigate toys as potential vectors for nosocomial infections in children’s hospitals. Microbiological samples from 120 toys were collected between April 2018 and November 2018. The specimens were cultivated on suitable cultivation agars for 24–72 h at 37 °C and CFU/cm2 (colony forming units) was determined. Antibiotic susceptibility testing was performed using disc diffusion and E-tests. Our results indicate that 84% of samples were contaminated with different microbes. Four distinct genera and thirty-seven species of bacteria were identified. The most frequently isolated pathogen was Sphingomonas paucimobilis (>603 CFU/cm2). Most of the identified microorganisms were members of normal human microbiota. Although Staphylococcus aureus and Acinetobacter baumannii were identified, CFU/cm2 was relatively low and they were found to be sensitive to antibiotics. Additionally, plastic toys showed the highest average CFU/cm2 of 91.9. Our results bolster the need for adoption and strict enforcement of proper disinfection techniques for toys in the hospital playrooms. View Full-Text
Keywords: toys as vector; nosocomial infection; bacteria on toys; pediatrics toys as vector; nosocomial infection; bacteria on toys; pediatrics
►▼ Show Figures 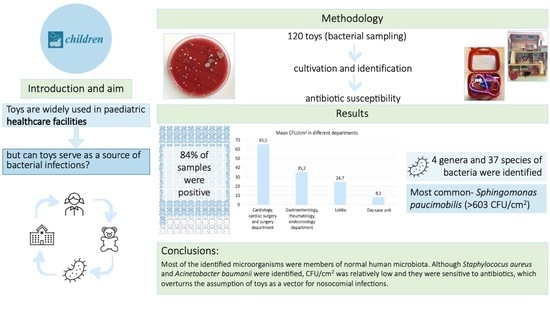