Progress in the Management of Paediatric-Onset Multiple Sclerosis

Considerable progress has been made in the understanding and treatment of paediatric-onset multiple sclerosis (POMS); how this has translated into more effective care is less well understood. Here, we evaluate how recent advances have affected patient management and outcomes with a retrospective review of POMS patients managed at two paediatric neuroimmunology centres. Two cohorts, seen within a decade, were compared to investigate associations between management approaches and outcomes. Demographic, clinical and neurocognitive data were extracted from case notes and analysed. Of 51 patients, 24 were seen during the period 2007–2010 and 27 during the period 2015–2016. Median age at onset was 13.7 years; time from symptom onset to diagnosis was 9 months. Disease-modifying therapies were commenced in 19 earlier-cohort and 24 later-cohort patients. Median time from diagnosis to treatment was 9 months for earlier vs. 3.5 months in later patients (p = 0.013). A wider variety of treatments were used in the later cohort (four medications earlier vs. seven in the later and two clinical trials), with increased quality of life and neurocognitive monitoring (8% vs. 48% completed PedsQL quality of life inventory; 58% vs. 89% completed neurocognitive assessment). In both cohorts, patients were responsive to disease-modifying therapy (mean annualised relapse rate pre-treatment 2.7 vs. 1.7, mean post-treatment 0.74 vs. 0.37 in earlier vs. later cohorts). In conclusion, over the years, POMS patients were treated sooner with a wider variety of medications and monitored more comprehensively. However, this hugely uncontrolled cohort did not allow us to identify key determinants for the improvements observed. View Full-Text
Keywords: demyelination; disease-modifying treatment; neurocognitive; neurodisability; relapse demyelination; disease-modifying treatment; neurocognitive; neurodisability; relapse
►▼ Show Figures 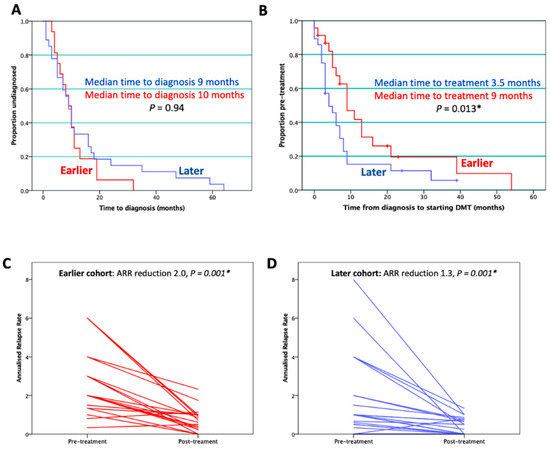