Fragile X-associated tremor and ataxia syndrome (FXTAS) is a neurodegenerative disease developed by carriers of a premutation in the fragile X mental retardation 1 (FMR1) gene. The core clinical symptoms usually manifest in the early 60s, typically beginning with intention tremor followed by cerebellar ataxia. Ataxia can be the only symptom in approximately 20% of the patients. FXTAS has a slow progression, and patients usually experience advanced deterioration 15 to 25 years after the initial diagnosis. Common findings in brain imaging include substantial brain atrophy and white matter disease (WMD). We report three cases with an atypical clinical presentation, all presenting with gait problems as their initial manifestation and with ataxia as the dominant symptom without significant tremor, as well as a faster than usual clinical progression. Magnetic resonance imaging (MRI) was remarkable for severe brain atrophy, ventriculomegaly, thinning of the corpus callosum, and periventricular WMD. Two cases were diagnosed with definite FXTAS on the basis of clinical and radiological findings, with one individual also developing moderate dementia. Factors such as environmental exposure and general anesthesia could have contributed to their clinical deterioration. FXTAS should be considered in the differential diagnosis of patients presenting with ataxia, even in the absence of tremor, and FMR1 DNA testing should be sought in those with a family history of fragile X syndrome or premutation disorders. View Full-Text
Keywords: fragile X-associated tremor and ataxia syndrome; FMR1; ataxia; neurodegeneration fragile X-associated tremor and ataxia syndrome; FMR1; ataxia; neurodegeneration
►▼ Show Figures 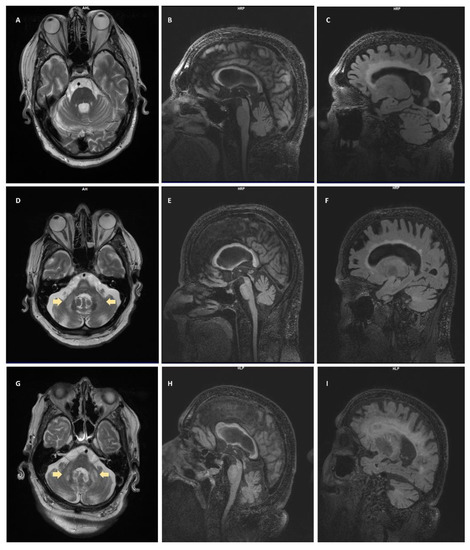