Nurse Perceptions of Artists as Collaborators in Interprofessional Care Teams

Paint it Black: Using Change-Point Analysis to Investigate Increasing Vulnerability to Depression towards the End of Vincent van Gogh’s Life

This study investigated whether Vincent van Gogh became increasingly self-focused—and thus vulnerable to depression—towards the end of his life, through a quantitative analysis of his written pronoun use over time. A change-point analysis was conducted on the time series formed by the pronoun use in Van Gogh’s letters. We used time as a predictor to see whether there was evidence for increased self-focus towards the end of Van Gogh’s life, and we compared this to the pattern in the letters written before his move to Arles. Specifically, we examined Van Gogh’s use of first person singular pronouns (FPSP) and first person plural pronouns (FPPP) in the 415 letters he wrote while working as an artist before his move to Arles, and in the next 248 letters he wrote after his move to Arles until his death in Auvers-sur-Oise. During the latter period, Van Gogh’s use of FPSP showed an annual increase of 0.68% (SE = 0.15, p < 0.001) and his use of FPPP showed an annual decrease of 0.23% (SE = 0.04, p < 0.001), indicating increasing self-focus and vulnerability to depression. This trend differed from Van Gogh’s pronoun use in the former period (which showed no significant trend in FPSP, and an annual increase of FPPP of 0.03%, SE = 0.02, p = 0.04). This study suggests that Van Gogh’s death was preceded by a gradually increasing self-focus and vulnerability to depression. It also illustrates how existing methods (i.e., quantitative linguistic analysis and change-point analysis) can be combined to study specific research questions in innovative ways. View Full-Text
Keywords: depression; self-focus; change-point analysis; time series; arts; Vincent van Gogh depression; self-focus; change-point analysis; time series; arts; Vincent van Gogh
►▼ Show Figures 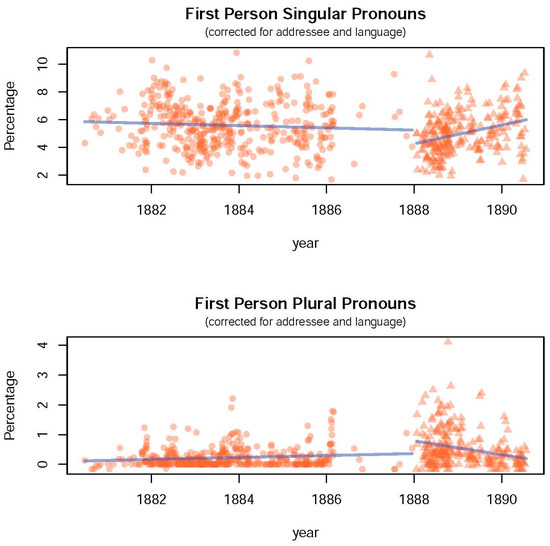