Despite numerous studies, the role of hormones in the induction of shoot apical meristem leading to reproductive development, especially regarding thermoperiodic plants, is still not fully understood. The key problem is separating the effects of the low temperature required for vernalization from those responsible for low temperature stress. An earlier experiment demonstrated the correlation between an increase of cytokinin level in the apical parts of winter rapeseed and the transition time into their reproductive phase during vernalization, i.e., low temperature treatment. From data obtained from the presented experiments, this study aims to contribute to the understanding the role of cytokinins in the induction of flowering based on the grafting of vegetative apical parts of winter rapeseed (scion) on the reproductive (stock) winter and spring genotypes. On the basis of analyses carried out using ultra-high-performance liquid chromatography coupled with tandem mass spectrometry in combination with microscopic observation of changes at the apical meristem, it was indicated that the increase in the amount of trans-zeatin and trans- and cis-zeatin-O-glucoside derivatives appeared in the early stages of apex floral differentiation. During further development, the content of all investigated cytokinins passed through the maximum level followed by their decrease. The final level in reproductive apices was found to be higher than that in vegetative ones. View Full-Text
Keywords: cytokinins; reproductive development; Brassica napus; grafting; shoot apical meristem cytokinins; reproductive development; Brassica napus; grafting; shoot apical meristem
►▼ Show Figures 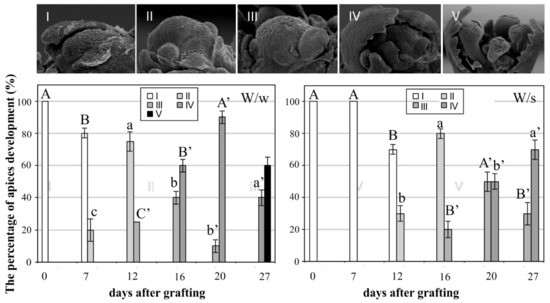