The Hypothesis Platform: An Online Tool for Experimental Research into Work with Maps and Behavior in Electronic Environments

The article presents a testing platform named Hypothesis. The software was developed primarily for the purposes of experimental research in cartography and psychological diagnostics. Hypothesis is an event-logger application which can be used for the recording of events and their real-time processing, if needed. The platform allows for the application of Computerized Adaptive Testing. The modularity of the platform makes it possible to integrate various Processing.js-based applications for creation and presentation of rich graphic material, interactive animations, and tasks involving manipulation with 3D objects. The Manager Module allows not only the administration of user accounts and tests but also serves as a data export tool. Raw data is exported from the central database in text format and then converted in the selection module into a format suitable for statistical analysis. The platform has many functions e.g., the creation and administration of tasks with real-time interaction between several participants (“multi-player function”) and those where a single user completes several tests simultaneously (“multi-task function”). The platform may be useful e.g., for research in experimental economics or for studies involving collaborative tasks. In addition, connection of the platform to an eye-tracking system is also possible. View Full-Text
Keywords: experimental testing; cognitive cartography; web-based software; behavior research method; psychological diagnostic; eye tracking experimental testing; cognitive cartography; web-based software; behavior research method; psychological diagnostic; eye tracking
►▼ Show Figures 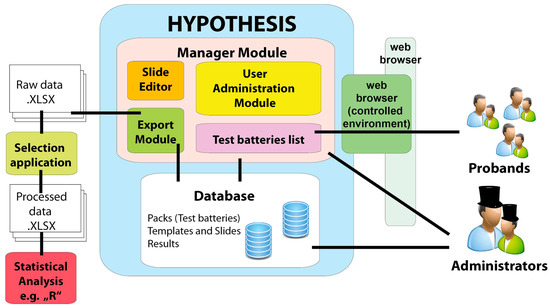