Gonorrhea is one of the most common, but still hidden and insidious, sexually transmitted diseases caused by Neisseria gonorrhoeae (gonococci). However, the diagnosis and treatment of gonorrhea are hampered by antigenic variability among gonococci, the lack of acquired immunity, and antimicrobial resistance. Further, strains resistant to cephalosporins, including ceftriaxone, the last line of defense, represent a growing threat, which prompted us to develop gonococci-specific diagnostic antibodies with broad-spectrum binding to gonococci strains to generate gonorrhea-detecting reagents. This study reports the identification of gonococci antibodies via bio-panning on gonococci cells using scFv-phage libraries. Reformatting the lead scFv-phage Clones 1 and 4 to a multivalent scFv1-Fc-scFv4 maxibody increased the sensitivity by up to 20-fold compared to the single scFv-Fc (maxibody) alone. Moreover, the multivalent maxibody showed broader cross-reactivity with clinical isolates and the ceftriaxone antibiotic-resistant World Health Organization (WHO) reference strain L. In contrast, the selected antibodies in the scFv-phage, maxibody, and multivalent maxibody did not bind to N. sicca, N. meningitides, and N. lactamica, suggesting the clinical and pharmaceutical diagnostic value of these selected antibodies for gonorrheal infections. The present study illustrates the advantages and potential application of multivalent maxibodies to develop rapid and sensitive diagnostic reagents for infectious diseases and cancer. View Full-Text
Keywords: Neisseria gonorrhoeae; multivalent maxibody; diagnosis; immunodiagnostics; bio-panning; sexually transmitted disease (STD); infectious disease; antibody Neisseria gonorrhoeae; multivalent maxibody; diagnosis; immunodiagnostics; bio-panning; sexually transmitted disease (STD); infectious disease; antibody
►▼ Show Figures 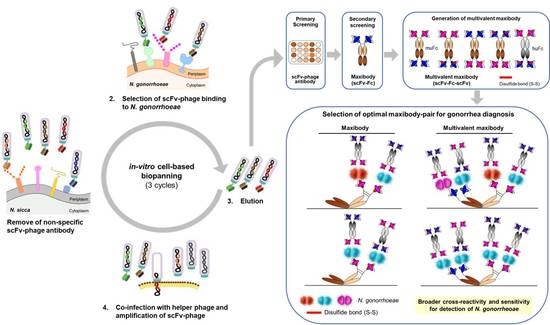