Non-homologous end-joining (NHEJ) is a major DNA repair pathway in mammalian cells that recognizes, processes and fixes DNA damage throughout the cell cycle and is specifically important for homeostasis of post-mitotic neurons and developing lymphocytes. Neuronal apoptosis increases in the mice lacking NHEJ factors Ku70 and Ku80. Inactivation of other NHEJ genes, either Xrcc4 or Lig4, leads to massive neuronal apoptosis in the central nervous system (CNS) that correlates with embryonic lethality in mice. Inactivation of either Paxx, Mri or Dna-pkcs NHEJ gene results in normal CNS development due to compensatory effects of Xlf. Combined inactivation of Xlf/Paxx, Xlf/Mri and Xlf/Dna-pkcs, however, results in late embryonic lethality and high levels of apoptosis in CNS. To determine the impact of NHEJ factors on the early stages of neurodevelopment, we isolated neural stem and progenitor cells from mouse embryos and investigated proliferation, self-renewal and differentiation capacity of these cells lacking either Xlf, Paxx, Dna-pkcs, Xlf/Paxx or Xlf/Dna-pkcs. We found that XRCC4-like factor (XLF), DNA-dependent protein kinase catalytic subunit (DNA-PKcs) and paralogue of XRCC4 and XLF (PAXX) maintain the neural stem and progenitor cell populations and neurodevelopment in mammals, which is particularly evident in the double knockout models. View Full-Text
Keywords: DNA repair; NHEJ; synthetic lethality; genetic interaction DNA repair; NHEJ; synthetic lethality; genetic interaction
►▼ Show Figures 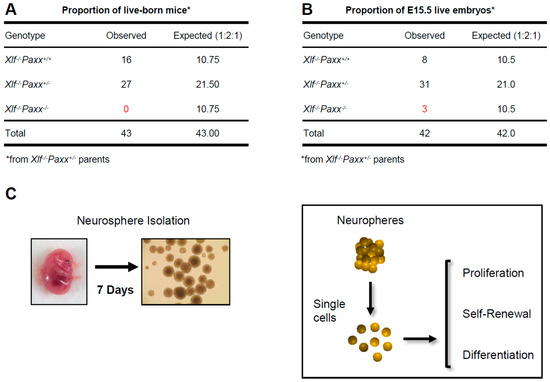