NAD- and NADPH-Contributing Enzymes as Therapeutic Targets in Cancer: An Overview
Previous Article in Special Issue

The Association of Matrix Metalloproteinases with Chronic Kidney Disease and Peripheral Vascular Disease: A Light at the End of the Tunnel?

Expression of MMP-2, MMP-9, and NGAL in Tissue and Serum of Patients with Vascular Aneurysms and Their Modulation by Statin Treatment: A Pilot Study

Background: Matrix metalloproteinases (MMPs) are involved in vascular wall degradation, and drugs able to modulate MMP activity can be used to prevent or treat aneurysmal disease. In this study, we evaluated the effects of statins on MMP-2, MMP-9, and neutrophil gelatinase-associated lipocalin (NGAL) in both plasma and tissue in patients with aneurysmal disease. Methods: We performed a prospective, single-blind, multicenter, control group clinical drug trial on 184 patients of both sexes >18 years old with a diagnosis of arterial aneurysmal disease. Enrolled patients were divided into two groups: Group I under statin treatment and Group II not taking statins. In addition, 122 patients without aneurysmal disease and under statin treatment were enrolled as a control group (Group III). The expression of MMPs and NGAL in plasma was evaluated using ELISA, while their expression in endothelial tissues was evaluated using Western blot. Results: The ELISA test revealed greater plasma levels (p < 0.01) of MMPs and NGAL in Groups I and II vs. Group III. Western blot analysis showed higher expression (p < 0.01) of MMPs and NGAL in Group II vs. Group I, and this increase was significantly higher (p < 0.01) in patients treated with low potency statins compared to high potency ones. Conclusions: MMPs and NGAL seem to play a major role in the development of aneurysms, and their modulation by statins suggests that these drugs could be used to prevent arterial aneurysmal disease. View Full-Text
Keywords: MMPs; NGAL; statins; arterial aneurysms; patients MMPs; NGAL; statins; arterial aneurysms; patients
►▼ Show Figures 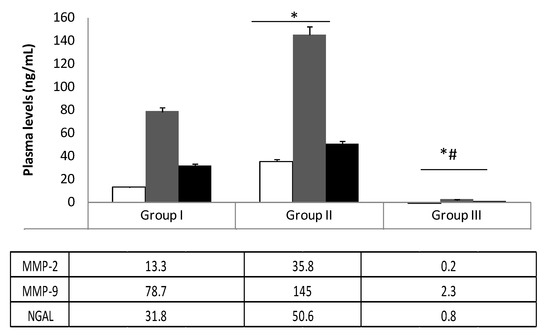