Element Abundances of Solar Energetic Particles and the Photosphere, the Corona, and the Solar Wind
Previous Article in Journal

In the interaction of fast ions with dense matter, the collision frequency is high enough to facilitate the simultaneous excitation of several electrons. Such multiply-excited few-electron systems have been exploited variously for plasma diagnostics. Beam-foil spectroscopic techniques, benefiting from the inherent time-resolution offered by the geometry of typical experiments, have proven particularly fruitful for the study of emission patterns and level lifetimes of specific multiply-excited levels, especially those of maximum spin and total angular momentum. Typical cases are recalled to illustrate some general principles. Among many others, earlier beam-foil measurements have targeted the core-excited 2p53s3p 4D7/2 – 2p5 3s3d 4F9/2 transition in several Na-like spectra ranging from S VI to Cu XIX. Data on the six intermediate elements missing at that time are now added. The interest in such atomic systems with multiple excitations and high total angular momentum values is discussed with a variety of examples. View Full-Text
Keywords: atomic spectroscopy; isoelectronic sequences; computations atomic spectroscopy; isoelectronic sequences; computations
►▼ Show Figures 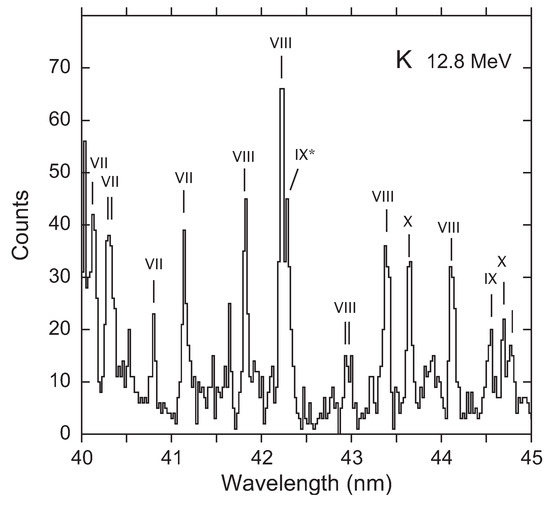