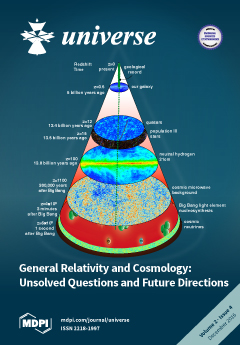 Cover Story (view full-size image): Astrophysical data is a powerfool tool for probing Relativistic cosmology. We observe that part of the universe which lies on surface of our past light cone, and within the cone along our local world-line (geological record and the abundance of chemical elements). The more distant an object, the further in its past we observe it. At late times, we use light from stars and galaxies. We also map large-scale structure by combining photons from objects at different redshifts. The earliest available information comes from the cosmic microwave background. The cosmic neutrino background and primordial gravitational waves, if observed, would probe an earlier epoch, even closer to the Big Bang. The challenge for modern cosmology is to test General Relativity at all scales, and to resolve the open questions: dark energy, dark matter, and Inflation. View this paper
Previous Issue
Volume 2, September
Next Issue
Volume 3, March
We use cookies on our website to ensure you get the best experience. Read more about our cookies here.
Accept
We have just recently launched a new version of our website. Help us to further improve by taking part in this short 5 minute survey here. here.
Never show this again