Silvio A. Bonometto
1,* and

In the early Universe, strongly interacting matter was a quark–gluon plasma. Both lattice computations and heavy ion collision experiments, however, tell us that, in the absence of chemical potentials, no plasma survives at MeV. The cosmological Quark–Hadron transition, however, seems to have been a crossover; cosmological consequences envisaged when it was believed to be a phase transition no longer hold. In this paper, we discuss whether even a crossover transition can leave an imprint that cosmological observations can seek or, vice versa, if there are questions cosmology should address to QCD specialists. In particular, we argue that it is still unclear how baryons (not hadrons) could form at the cosmological transition. A critical role should be played by diquark states, whose abundance in the early plasma needs to be accurately evaluated. We estimate that, if the number of quarks belonging to a diquark state, at the beginning of the cosmological transition, is , its dynamics could be modified by the process of B-transfer from plasma to hadrons. In turn, by assuming B-transfer to cause just mild perturbations and, in particular, no entropy input, we study the deviations from the tracking regime, in the frame of SCDEW models. We find that, in some cases, residual deviations could propagate down to primeval nuclesynthesis. View Full-Text
Keywords: cosmology; Quark–Hadron transition; dark matter; dark energy; cosmological inflation cosmology; Quark–Hadron transition; dark matter; dark energy; cosmological inflation
►▼ Show Figures 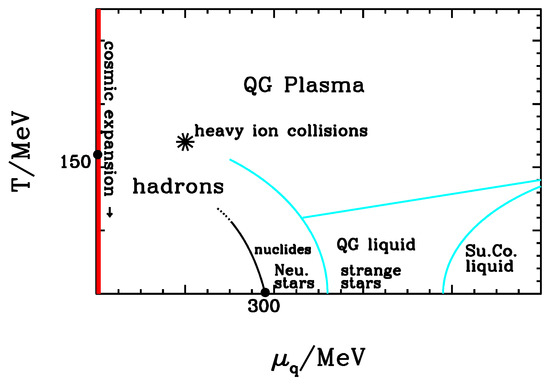