:
Extra-virgin olive oil (383 samples; EVOOs) of three consecutive harvesting years from nine Italian regions were collected and submitted to an 1H NMR-chemometric protocol to characterize the samples according to their origin (geographical area and variety). A more complete assignment of the olive oil 1H spectrum in CDCl3 and DMSOd6 was reported identifying 24-methylencycolartanol. A single classification model provided the discrimination of EVOOs among the three geographical macro-areas (North, Islands, Center-South), whereas a hierarchical approach based on breaking the overall classification problem into a series of smaller linear discriminant analysis (LDA) sub-models was tested to differentiate olive oils according to their geographical regions. Specific compounds responsible for olive oil characterization were identified.
Keywords:
extra virgin olive oil (EVOO); 1H-NMR; linear discriminant analysis (LDA) 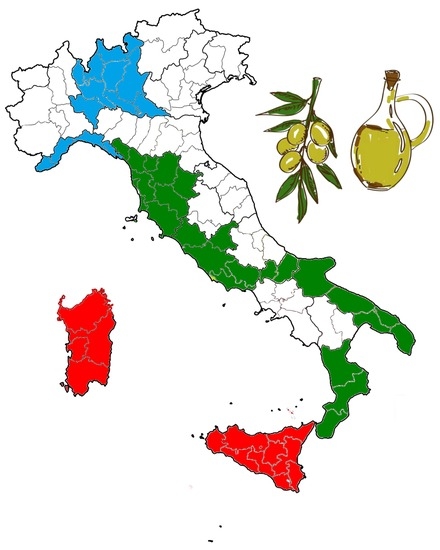 Over recent years, newspapers and TV programs have highlighted the sensorial and nutritional properties of Italian extra-virgin olive oils (EVOOs), but they have also reported scandals concerning Italian product adulteration. Therefore, if on one hand Italian EVOOs are considered “peculiar” and “prestigious” products, on the other hand this Italian richness is constantly taken under discussion for the risk of adulteration or mislabelling. Italy represents the second largest producer of EVOOs in the world, after Spain, and Italians are also the largest consumers according to the International Olive Oil Council [1]. Due to the agronomic characteristics of the plant Olea europaea L., the Italian territory is especially suitable for its farming and Italy can account for 43 EVOOs provided with Protected Designation of Origin (PDO) or Protected Geographical Indication (PGI) certifications. Although EU Regulation 182/2011 [2] requires mandatory labelling reporting the geographical origin of olive oils, the actual official quality control methods (Regulation 2568/91/EEC and EU Reg. 299/2013) are unable to verify their real geographical origin [3,4]. Therefore, a potential for the mislabelling of olive oils without risk of detection exists.
The relevance of the problem is highlighted by the fact that the European Union has launched many calls to find methods capable of checking authentication and traceability of olive oils (e.g., MEDEO project, FP6 TRACE project, FP7 Food Integrity project, Horizon 2020 call on olive oils).
The problem of geographical determination of olive oils is a difficult issue, since it also involves economic and political interests. However, the scientific world has proposed interesting possible solutions. Among the different analytical techniques, NMR spectroscopy, combined with multivariate statistical analysis, has gained an important role in geographical olive oil characterization [5]. NMR analysis provides both qualitative and quantitative information about not only the principal components of EVOOs, but also its minor compounds, including volatile aldehydes and terpenes, and healthy compounds such as squalene and β-sitosterol [6]. Furthermore, it is well known that NMR experiments are quickly performed and require neither selective extraction nor derivatization, thus reducing the experimental error and the analysis time [7]. In recent studies, the NMR analytical chemometric approach has been interfaced with the aim to build up statistical models able to characterize olive oils from Liguria [6], Apulia [8,9], Tuscany [10] and Sicily [11,12].
A combined approach, including isotope ratio mass spectrometry and NMR spectroscopy, was proposed to discriminate Italian and Tunisian olive oils [13].
In this paper, a detailed NMR-based study of olive oils from nine Italian regions over three consecutive harvesting years was carried out to investigate the presence of variables not affected by seasonal and/or climatic changes, thus identifiable as possible markers of EVOOs origin (geographical area and variety).

Italian extra-virgin olive oils (383 samples), collected from 9 Italian regions for three consecutive years, were investigated according to the NMR-chemometric protocol previously described [6,14]. It has been reported that an NMR-chemometric protocol can be a powerful tool for the geographical characterization of olive oils at different geographical scales, namely on PDO, regional, national, and Mediterranean scales. For instance, on PDO or regional scales, extra virgin olive oils from different areas of Lazio [15], Veneto [16], Tuscany [17], and Apulia [18,19] have been classified according to their geographical areas. On a national scale, a protocol based on the 31P NMR method has been used to characterize olive oils from different Greek areas [20,21], whereas using a 1H NMR methodology Italian extra virgin olive oils sampled in three harvesting years and coming from Tuscany, Lazio, and Lake Garda have been classified according to their origin [5].
Here, a study at the national scale, extended to olive oils from nine Italian regions, is reported for the first time.

According to the NMR protocol reported in literature [6], the intensity of 15 1H NMR signals was measured and submitted to the chemometric analysis (see Figure 1 and Table 1).
A more complete assignment of the olive oil 1H spectrum was obtained by means of the addition of 24-methylenecycloartanol (24MC) synthesized standard [22] to the olive oil sample and 2D experiments. The 1H and 13C assignment of the 24MC, obtained by 2D experiments (see Table S1), agreed with the assignment reported previously [23]. Signals at 4.604 and 4.665 ppm, previously reported generically as terpenes [13,24], were assigned to CH2-31 methylene protons of 24MC, whereas the two doublets at 0.968 and 0.974 previously reported as wax [13,24], were assigned to CH3-26 and CH3-27 protons, respectively [25] (see Figure 2).

Olive oil samples (20 μL) were dissolved in 700 μL of deuterated chloroform (CDCl3) and 20 μL of deuterated dimethylsulfoxide (DMSOd6) was added to increase the sample stability. To avoid degradation, the 1H spectra are acquired within an hour from the sample preparation.
The 1H-NMR spectra were performed on a Bruker AVANCE 600 spectrometer operating at the protonic frequency of 600.13 MHz (14.3 T), equipped with a 5 mm probe for the protons. The signals of residual non-deuterated solvents (CHCl3 and DMSO) at 7.260 ppm and at 2.526 ppm, respectively, were used to verify the spectrum resolution.
The acquisition parameters used were: Time domain (TD)= 64 K; spectral window (SW) = 18.5 ppm; O1 = 4580 Hz; receiver gain (RG) = 16; 90° degrees pulse optimized for each spectrum; delay (D1) = 0.5 s; acquisition time (AQ) = 2.96 s; number of scansion (NS) = 1024; dummy scans (DS) = 4; T = 300 K.
The 1H spectra were processed using the program TOPSPIN (version 1.3) with the following parameters: LB= 0.3 Hz (exponential function); SI = 64 K (zero filling); manual correction of the phase; spectrum normalization with respect to the signal due to the methylene protons in β to the carbonyl (2.251 ppm) whose intensity is set equal to 1000; semi-manual correction of the base line (cubic spline baseline correction); and automatic reading of the intensity.
A 24-methylenecycloartanol standard was synthesized from the commercially available oryzanol (Merck CDS021604-1G containing 40% of 3-O-ferulylcycloartenol and 40% of 3-O-ferulyl-24-methylenecycloartanol) following the reported procedure [22].

In order to differentiate the olive oil samples from the different regions under investigation, a classification strategy based on linear discriminant analysis was adopted. Classification methods aim at building predictive models for qualitative (discrete-valued) responses; each of the possible values of the responses is deemed a category (or class). In this context, classification methods formulate models to predict, for each sample, the value of this qualitative response, that is, its class based on the experimental measurements collected. This is accomplished in a probabilistic way, that is, by evaluating for each individual the probabilities of the different possible responses (i.e., of the sample being class 1, class 2, …, up to class K) and then selecting the most probable outcome. Among the different classification techniques, linear discriminant analysis (LDA) assumes that within each category, data are normally distributed, so that calculation of the probability that a sample is class k only requires the estimation of the centroid and covariance matrix of such distribution: for this reason, methods such as LDA are called parametric. Accordingly, the probability that a sample is from (or, as it often said, belongs to) class k, , can be calculated as where is the class centroid and is the pooled within-class variance/covariance matrix, which is assumed to be the same for each category, whereas is a normalization constant.
During the model building stage, the training samples from the different categories are used to estimate the parameters , , in Equation (1). Once the parameters of the probability functions for the different classes are estimated, predictions on an unknown sample are accomplished by inserting the measured profile in Equation (1) for the different categories in order to calculate the probabilities of it belonging to each of the investigated classes. The sample is then predicted to belong to the category corresponding to the highest value of the probability.
In this study, at first a global model considering all the categories involved was calculated. In a second stage, a hierarchical classification approach was adopted, in which LDA was repeatedly applied to discriminate among groups of decreasing heterogeneity.

A deep characterization of the Italian extra-virgin olive oils was performed by means of a combination of NMR spectroscopy and chemometric analysis. A single classification model provided the discrimination of Italian EVOOs among the North, Islands, and Center-South geographical areas. Northern Italy samples were characterized by higher values of 24MC and TERP1 and lower values of SAT and LNEIC, whereas the Island olive oils had higher amounts of TERP4, Dlneic, SQUA and LNEIC, and lower concentrations of TERP1 and SITO. Central-Southern Italian samples showed higher values of SAT, LNNC and SITO and lower values of TERP4 and 24MC.
A hierarchical approach, based on breaking the overall classification problem down into a series of smaller LDA sub-models, was tested in order to differentiate the regions within each of the three identified macro-areas. A good classification accuracy for most of the classes corresponding to Italian regions was obtained together with the model interpretation based on chemical composition.

This work has been supported by Italian Ministry of Education, Universities and Research—Dipartimenti di Eccellenza—L. 232/2016.

The authors acknowledge UNAPROL for the assistance in providing contacts for the samples collection.