Involvements of Hyperhomocysteinemia in Neurological Disorders
Previous Article in Journal

Characterization of Sunflower Oil Extracts from the Lichen Usnea barbata

Metabolomes and Lipidomes of the Infective Stages of the Gastrointestinal nematodes, Nippostrongylus brasiliensis and Trichuris muris

Soil-transmitted helminths, including hookworms and whipworms, infect billions of people worldwide. Their capacity to penetrate and migrate through their hosts’ tissues is influenced by the suite of molecules produced by the infective developmental stages. To facilitate a better understanding of the immunobiology and pathogenicity of human hookworms and whipworms, we investigated the metabolomes of the infective stage of Nippostrongylus brasiliensis third-stage larvae (L3) which penetrate the skin and Trichuris muris eggs which are orally ingested, using untargeted liquid chromatography-mass spectrometry (LC-MS). We identified 55 polar metabolites through Metabolomics Standard Initiative level-1 (MSI-I) identification from N. brasiliensis and T. muris infective stages, out of which seven were unique to excretory/secretory products (ESPs) of N. brasiliensis L3. Amino acids were a principal constituent (33 amino acids). Additionally, we identified 350 putative lipids, out of which 28 (all known lipids) were unique to N. brasiliensis L3 somatic extract and four to T. muris embryonated egg somatic extract. Glycerophospholipids and glycerolipids were the major lipid groups. The catalogue of metabolites identified in this study shed light on the biology, and possible therapeutic and diagnostic targets for the treatment of these critical infectious pathogens. Moreover, with the growing body of literature on the therapeutic utility of helminth ESPs for treating inflammatory diseases, a role for metabolites is likely but has received little attention thus far. View Full-Text
Keywords: metabolites; infective stage; Nippostrongylus brasiliensis; Trichuris muris; parasites; LC-MS; metabolomic; lipidomic metabolites; infective stage; Nippostrongylus brasiliensis; Trichuris muris; parasites; LC-MS; metabolomic; lipidomic
►▼ Show Figures 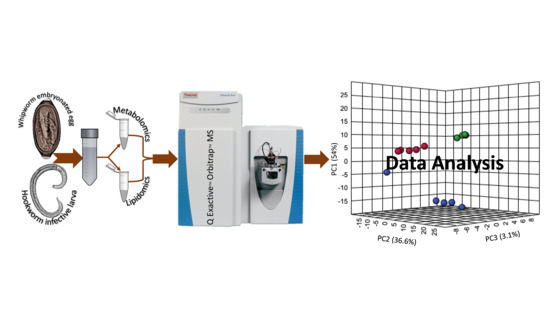