Effect of Gender, Rearing, and Cooking on the Metabolomic Profile of Porcine Muscles

Copper is an essential trace element in animals that is beneficial to hematopoiesis, growth, metabolism, and various important physiological activities of life [1]. For a long time, copper has been added to swine diets at high concentrations to reduce infection and promote growth, especially for weanling pigs [2,3]. However, high concentrations of copper in the diet may lead to organ damage of swine and pose a threat to the environment [4,5]. According to the latest regulations of China and the European Union, the maximum level of copper in piglets feed should not exceed 150 and 125 ppm, respectively [6,7]. Therefore, many researchers are exploring the appropriate concentration of copper fed to swine.
The traditional method of copper supplementation has been through using inorganic copper sources, such as CuSO4. However, inorganic coppers are poorly absorbed by swine, and the diets are often supplemented with more copper than they actually need. Huang et al. evaluated the effect of dietary copper amount on weanling pigs. Compared with control pigs (0.88 mg/L), soluble copper concentrations in the proximal jejunal (5.54 mg/L) were increased significantly when fed with a diet containing 225 mg of copper per kilogram [8]. Previous studies have reported that Cu overload leads to oxidative stress and subsequent oxidative damage to proteins, lipids, and nucleic acids because of its ability to generate free radical species, such as hydroxyl radicals (OH−) [9,10]. At the cellular level, copper ions in various oxidation states can participate in oxidation and reduction reactions. For example, the reduction of cupric ions forming cuprous ions by superoxide radical anions that may catalyze the formation of hydroxyl radicals via the Fenton reaction inducing oxidative stress and thereby cell injury [11]. Over the last two decades, organic copper sources, such as amino acid chelate and proteinate, have been increasingly used in livestock. Many studies have shown that organic sources of copper have higher bioavailability and lower mineral excretion than inorganic sources, with improved growth performance of pigs [12,13]. However, one of the major challenges when investigating high absorption of organic copper is that there is little known about the metabolism mechanisms in livestock.
Copper metabolism includes many processes related to copper uptake, intracellular distribution of copper, and copper export. In general, copper ions dissociate from their organic or inorganic carriers in the intestinal lumen and are absorbed via a passive or active route into enterocytes lining the gastrointestinal tract. After processing in the liver to bound albumin, copper is distributed to other tissues in a second phase, and excess copper is excreted in feces. Because both copper deficit and excess are deleterious to the organism [14], copper levels are tightly regulated by a complicated system, which has many vital proteins working together to ensure a stable level of copper in organisms. The high-affinity copper transporter 1 (CTR1) is the primary player in the uptake of extracellular copper. ATOX1 can carry copper to copper-ATPases (ATP7A and ATP7B) in the Golgi apparatus, and ATP7A and ATP7B are ATP-dependent translocators of copper across membranes when intracellular copper levels are high [15,16]. Studies have shown that organic metals, such as proteinate, may be absorbed attached to PepT1, a brush border membrane-bound di- and tri-peptide transporter, which has been identified in all major livestock species. This transporter is not overly specific, as molecules other than di- and tri-peptides can be transported through it. Joanne Keenan et al. compared organic and inorganic copper exposure to HT29 and Caco-2 cells. Their findings showed that PepT1, ZnT1, and CTR1 were increased, particularly for CuSO4 and copper proteinate in Caco-2 cells [17].
To the best of our knowledge, there is scarce study about different damage and metabolic mechanisms between organic and inorganic copper in pigs at the cellular level. In this study, we analyzed the effects of organic and inorganic copper sources on porcine small intestinal epithelial cell line (IPEC-J2) to evaluate their effect on cell growth, oxidative stress, copper absorption efficiency, and copper metabolism, to provide data support for the precise use of copper in swine production. Three sources of copper (copper sulfate—CuSO4, copper glycinate—Cu-Gly, and copper proteinate—Cu-Pro) were compared.

The Porcine small intestinal epithelial cell line (IPEC-J2) was obtained from the American Type Culture Collection. And cells were cultured in DMEM-F12 media (Hyclone) additionally supplemented with 10% FBS (Gibco), 1% ITS (Gibco), 50 U/mL of penicillin, 50 μg/mL of streptomycin (Gibco) and 1% HEPES (Gibco). Cells were seeded (2.0 × 105 cells/mL) in 25 cm2 culture dishes in a 5% CO2 humidified incubator at 37 °C for 24 to 48 h, then cells were divided into several groups and cultured with complete medium containing 30 to 120 μM of copper sulfate (CuSO4), copper glycinate (Cu-Gly,) or copper proteinate (Cu-Pro), respectively. The exposure concentration was selected based on previous researches, which basically corresponds to the soluble copper concentrations in the proximal jejunal in vivo model [6]. The control group was incubated with complete medium with no extra copper added. After 10 h, the cells were collected for uptake and metabolomic analysis.

Cellular viability assays were conducted with a water-soluble tetrazolium salt-8 (WST-8) cell counting kit (CCK-8, Dojindo, Japan) according to the method described in the manufacturer’s instructions. IPEC-J2 in cell culture medium (90 μL/well) at a density of 1 × 104 cells/well were added into the 96-well plate and then treated with varying concentrations of CuSO4, Cu-Gly, and Cu-Pro (10 μL/well) for 10 h exposure. Afterward, the CCK-8 assay reagent (10 μL/well) was added into the wells for 1 h incubation. Then, the absorbance of the dye was detected on a microplate reader (BIO-RAD 680, Hercules, CA, USA) at 450 nm.

Cells were seeded in 25 cm2 culture dishes for 24 h and treated with different concentrations of CuSO4, Cu-Gly, and Cu-Pro for 10 h, then the cell culture medium was removed, and the cells were washed twice with PBS. After harvesting with trypsin and washing with PBS, the cells were digested by 98% HNO3 and Milli-Q water (V:V = 1:1) at 100 °C for about 1 h. Then after centrifugation (3000 rpm, 5 min), the supernatants were collected for the determination of copper uptake. The determination of copper in IPEC-J2 cells was done by ICP-MS according to the method described earlier [18].

Intracellular reactive oxygen species(ROS) generation was determined by using 2, 7-dichlorofluorescin diacetate (DCFH-DA). Briefly, 1 × 104 cells were cultured in a 96-well plate, after copper treatment, cells were washed and incubated with 200 μL DCFH-DA (10 μM) working solution at 37 °C for 30 min, then cells were washed 3 times with PBS. Afterward, the fluorescence intensities from every well were detected on a microplate reader (BioTek Synergy4, Winooski, VT, USA), excitation and emission wavelengths were 498 and 528 nm, respectively.

2.8. Measurement of GSH and GSSG

As described previously [19], an extraction and fast analytical method for simultaneous analyses of reduced and oxidized glutathione (GSH and GSSG, respectively) in cells were applied by LC-MS/MS to get more reliable results. Harvested cells were dissolved in 300 μL PBS, the samples were treated with 10 μL of 0.5 mM DTNB solution in methanol, mixed, and incubated at room temperature for 15 min, and the reaction was stopped by the addition of 60 μL of cold sulfosalicylic acid solution (20% w/v) to precipitate proteins. After 15 min at 4 °C, the precipitated proteins were removed by centrifugation (20,800× g at 4 °C for 15 min). The clear supernatant (150 μL) was used for LC-MS/MS analyses.
Chromatographic separation of the GSH and GSSG in cells was achieved on an Agilent Eclipse BEH 18 column (2.1 mm × 150 mm, 3.5 μm). The column temperature was 30 °C. The mobile phase consisted of solutions A (0.1% aqueous formic acid solution) and B (acetonitrile). A gradient program was used for elution: 5% solution B (initial), with 90% solution B (from 0 to 7 min), 90% solution B (from 7 to 10 min), and 95% solution B (from 10 to 10.1 min). A 5-min equilibration was necessary before the next injection. The mobile phase was delivered at a flow rate of 0.3 mL/min. The optimized electron spray ionization condition was gas temperature 350 °C, gas flow 5 L/min, sheath gas temperature 350 °C, sheath gas flow 7 L/min, and capillary voltage 3500 V. High-purity nitrogen was used as the nebulizing gas. Positive ions were monitored. Multiple reaction monitor mode was applied for quantitative and qualitative analysis. The ion transitions, m/z 613.2/482.4 and 613.2/355.1, were selected and used for quantification and identification of the GSSG, respectively. The ion transitions, m/z 308.3/179 and 308.3/162, were selected for quantification and identification of the GSH, respectively. The amounts of GSH and GSSG in the cells were quantified using a calibration curve.

As mentioned above, cells were treated and harvested for the detection of oxidative stress biomarkers. The total superoxide dismutase (SOD) activity was assessed using an assay kit (Nanjing Jiancheng Bioengineering Institute, China) according to the manufacturer’s instructions.

MDA was measured by an acid reactive substance (TBARS) assay. In briefly, the TBARS assay was carried out by adding 1.0 mL of trichloroacetic acid (0.5 M) and l.0 mL TBA (0.02 M) to each tube that contained cells and boiling the mixture for 45 min. After cooling to room temperature and centrifugation (3000 rpm, 5 min), the concentration of MDA in the supernatant was detected by HPLC.
Chromatographic separation of MDA was achieved on a Waters Atlantis dC18 column (particle diameter 5 µm, 150 × 4.6 mm i.d.). The mobile phase was 10 mM ammonium acetate aqueous solution–methanol (70:30, v/v). The mobile phase flow rate was 1.0 mL/min, and the injection volume was 10 µL. Detection with a UV–vis detector was carried out at 532 nm. The amounts of MDA in samples were quantified using a calibration curve developed with the MDA standard solution.

All statistical analyses were performed using SPSS 19.0 software, and values are presented as means ± standard error of means (SEM). Data were examined with two-way ANOVA by Tukey’s multiple comparisons test. The value of p < 0.05 was considered as statistically significant.

3.1. The Effects of Copper on Cell Viability

Since the bioavailability of the inorganic and organic copper sources may lead to different uptake rates, the intracellular copper levels were measured by ICP-MS. After exposing IPEC-J2 to CuSO4, Cu-Gly, and Cu-Pro at the concentrations of 30 and 120 μM for 10 h, the Cu contents in cells were significantly increased with the increase in copper exposure compared to control, as shown in Figure 2. At 120 μM, significant differences in uptake rates among the three kinds of copper were observed. Compared to control, the highest copper absorption was in the Cu-Pro treated group with a 6.3-fold increase; the lowest was the CuSO4 treated group with a 4.4-fold.

3.3. The Effects of Copper on Oxidative Stress and Antioxidant Activity

3.5. The Effects of Copper on CTR1 and PepT1 Protein Expression

Figure 5 shows the protein expression of CTR1 and PepT1. Compared to the control, significant downregulation of CTR1 was observed after CuSO4 and Cu-Gly pretreatments at 120 μM. There was no difference between the Cu-Pro treatment group and control. However, the expression of PepT1 protein was significantly upregulated by 120 μM Cu-Pro treatment group with 1.9-fold, with no difference resulting from either level of CuSO4 or Cu-Gly pretreatments.

The financial support from the National Key Research and Development Program of China (2017YFC1600306) is gratefully acknowledged. 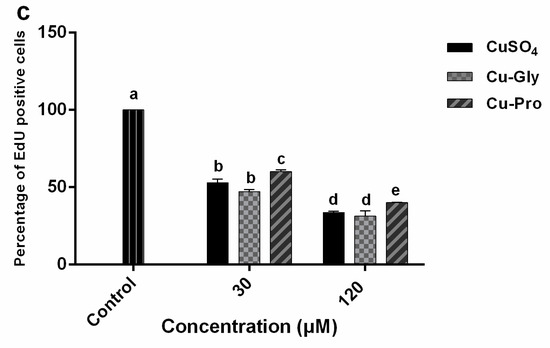 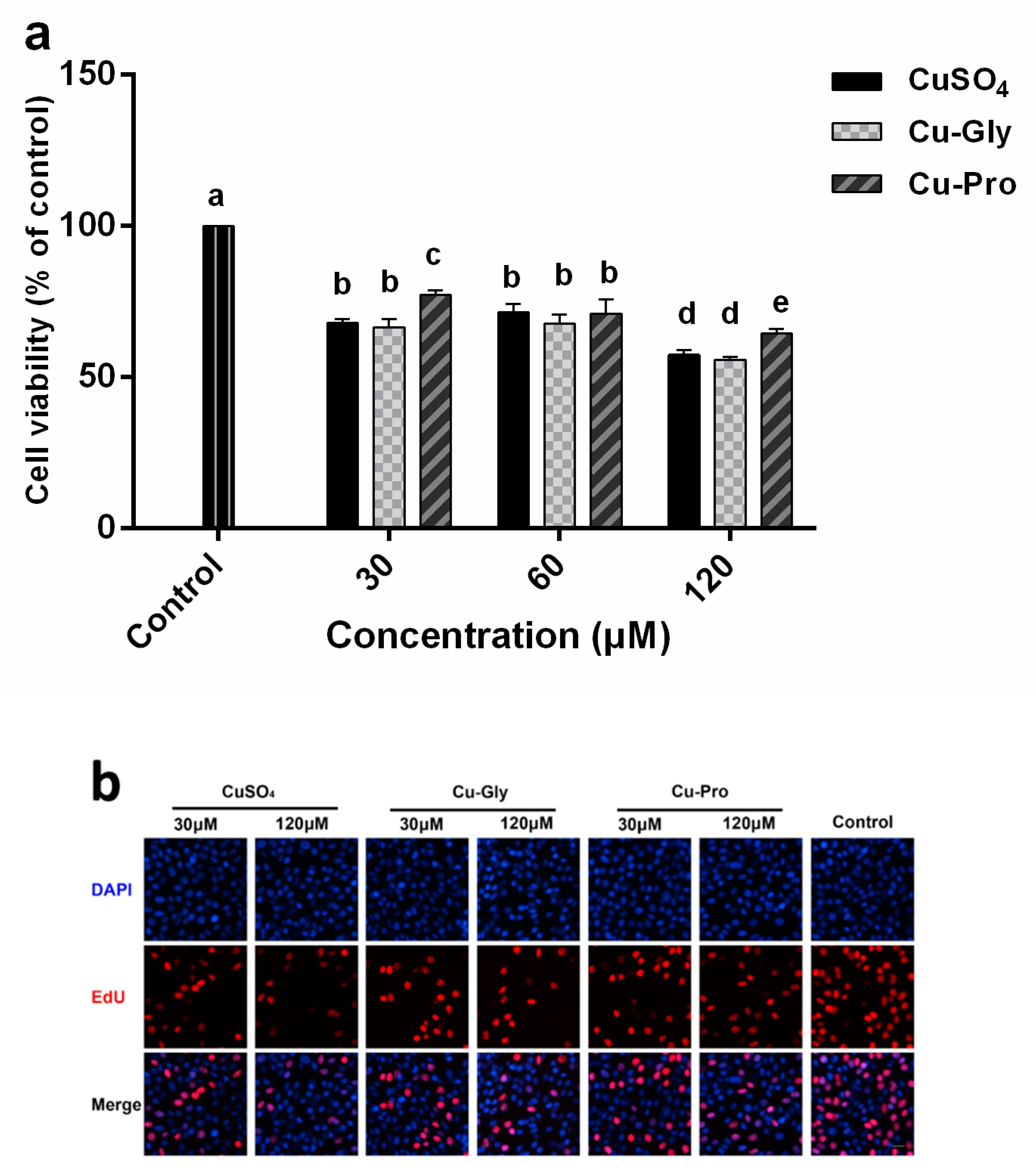 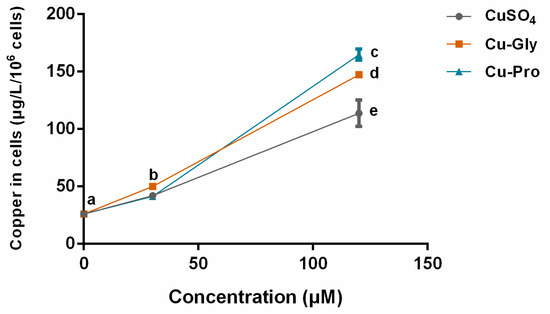 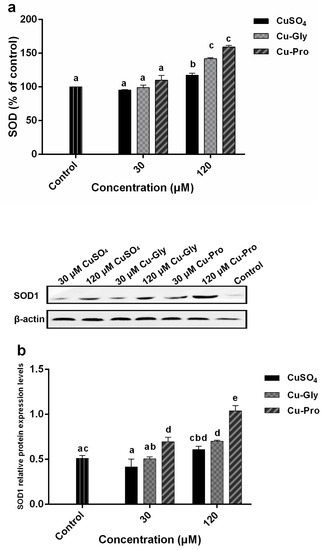 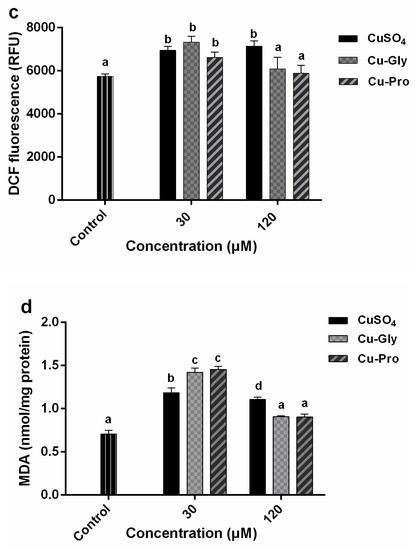 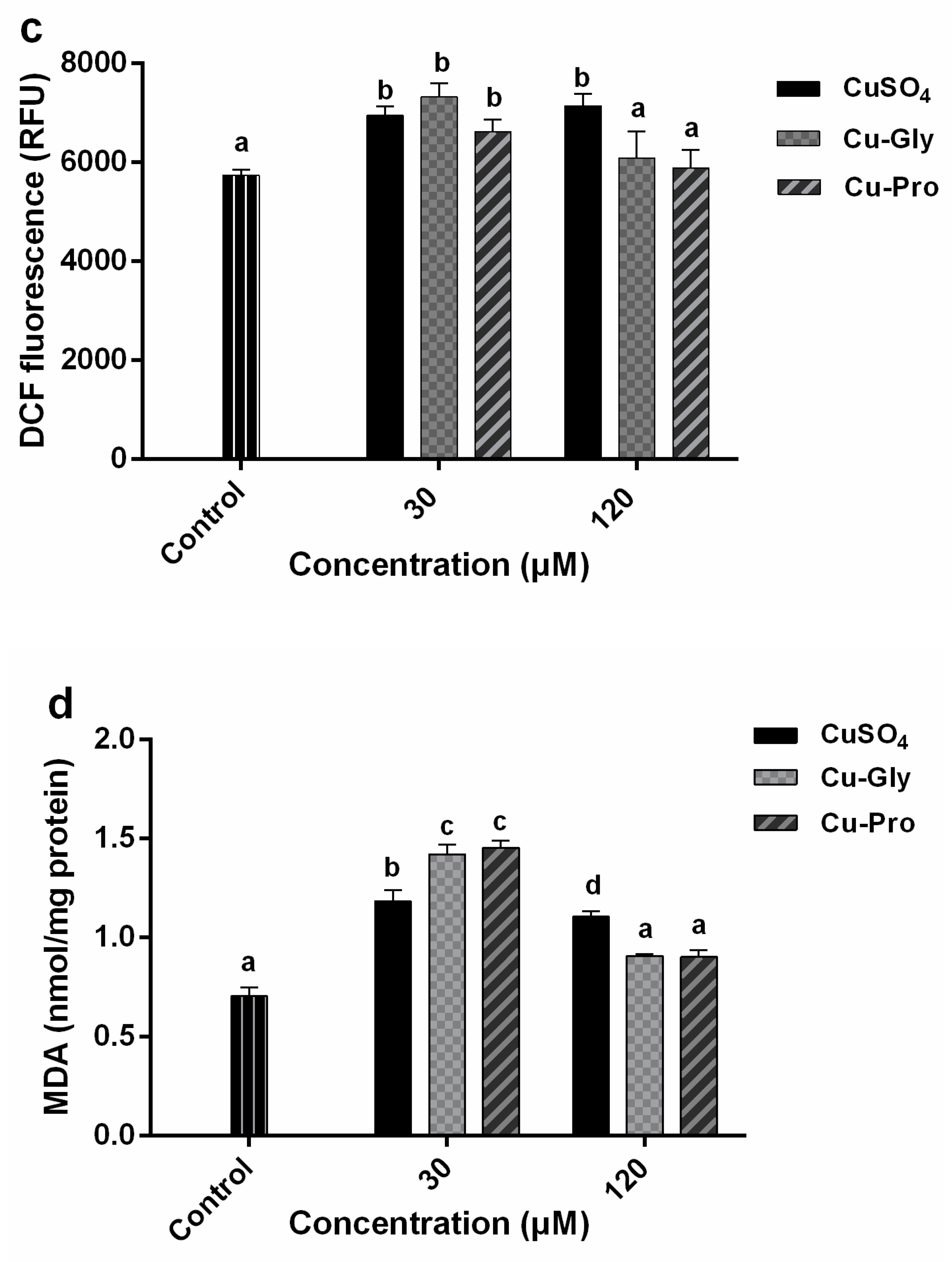 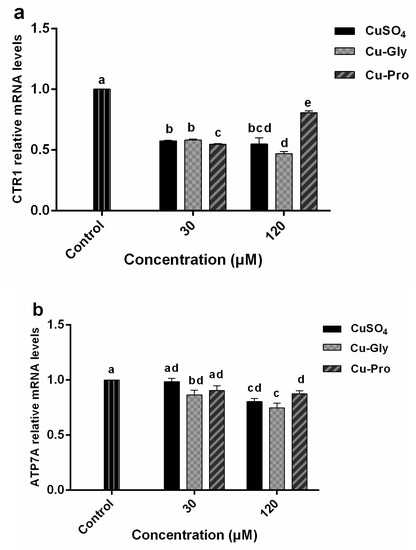 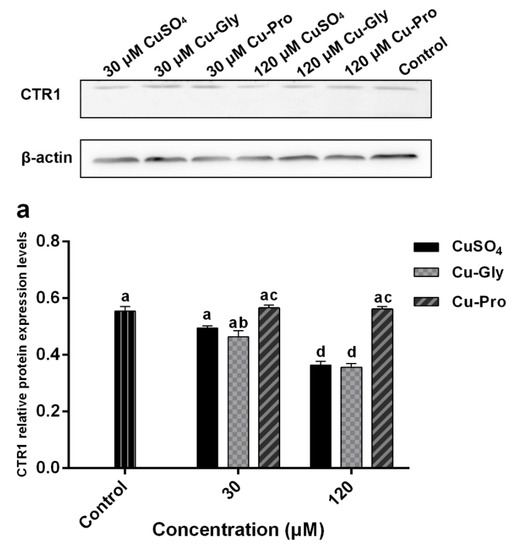 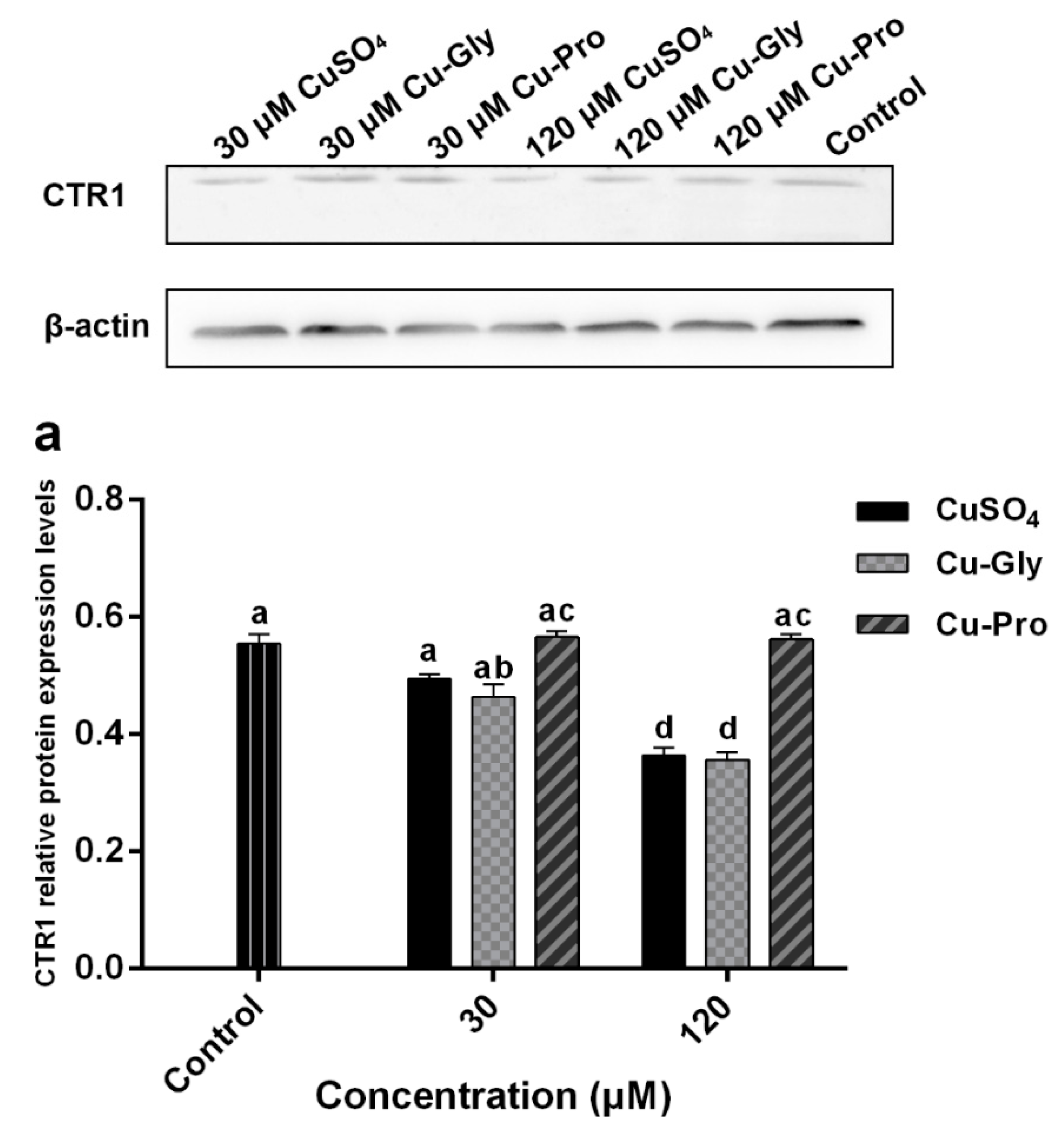 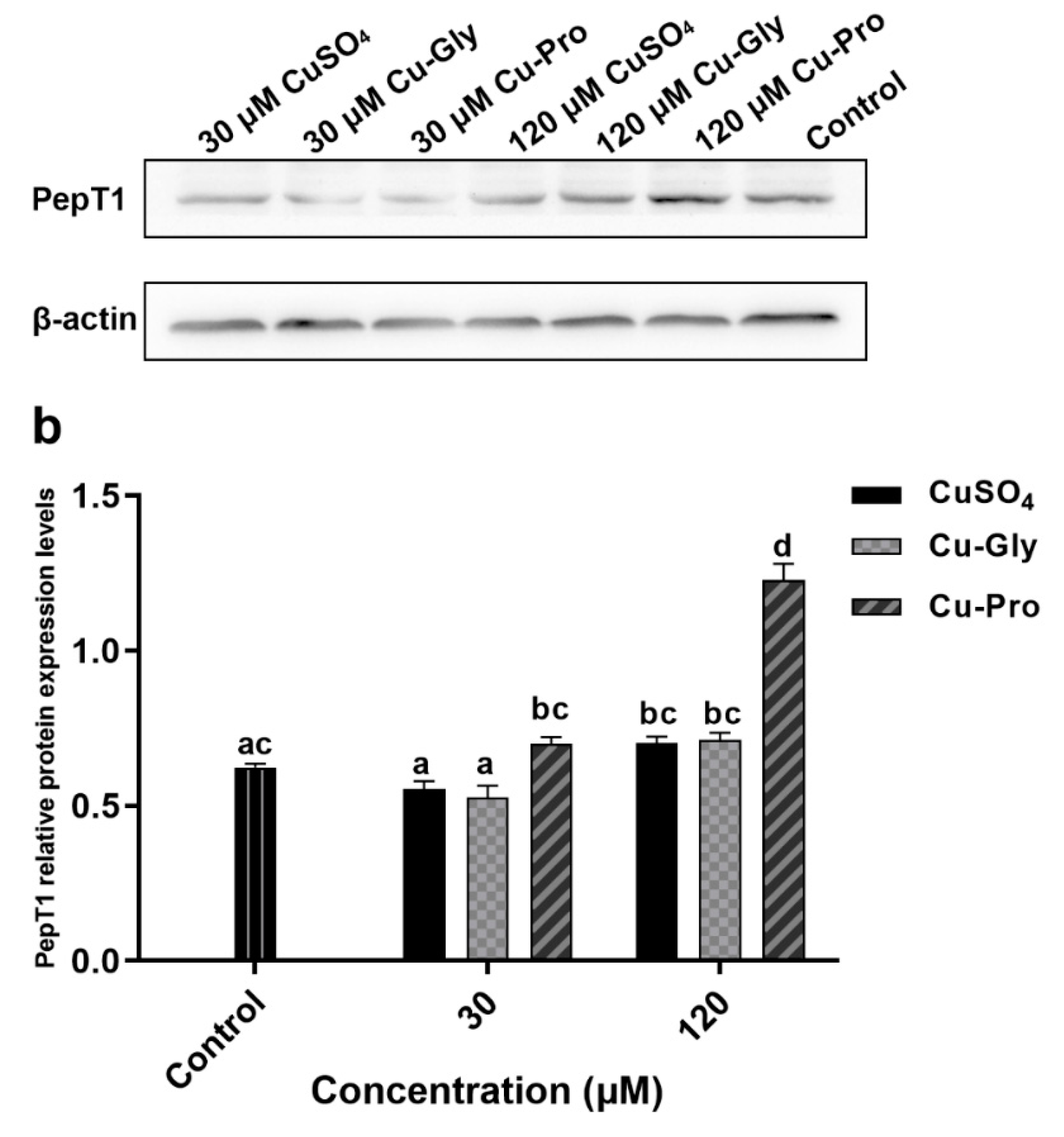