Effect of Gender, Rearing, and Cooking on the Metabolomic Profile of Porcine Muscles

To clarify the relationship between the fiber type composition and meat quality, we performed metabolomic analysis using porcine longissimus dorsi (LD) muscles. In the LD of pigs raised outdoors, the expression of myosin heavy chain (MyHC)1 (slow-twitch fiber marker protein) was significantly increased compared with that of MyHC1 in pigs raised in an indoor pen, suggesting that rearing outdoors could be considered as an exercise treatment. These LD samples were subjected to metabolomic analysis for examining the profile of most primary and secondary metabolites. We found that the sex of the animal and exercise stimulation had a strong influence on the metabolomic profile in the porcine skeletal muscles, and this difference in the metabolomic profile is likely in part due to the changes in the muscle fiber type. We also examined the effects of cooking (70 °C for 1 h). The effect of exercise on the metabolomic profile was also maintained in the cooked muscle tissues. Cooking treatment resulted in an increase in some of the metabolite levels while decreasing in some other metabolite levels. Thus, our study could indicate the effect of the sex of the animal, exercise stimulus, and cooking on the metabolomic profile of pork meat. View Full-Text
Keywords: pork; meat; skeletal muscle; fiber type; cooking pork; meat; skeletal muscle; fiber type; cooking
►▼ Show Figures 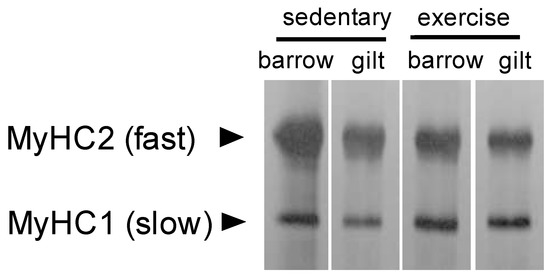