Vehicle mobilities for passengers in a city’s downtown area or in the countryside are significant points to characterize their functions and outputs. We focus on commercial sightseeing vehicles in a Japanese city where many tourists enjoy sightseeing. Such mobilities and their visualizations make tourist activities smoother and richer. We design and install a low-power, wide-area positioning system on a rickshaw, which is a human-pulled, two- or three-wheeled cart, and monitor its mobility in Hikone City. All the spatial locations, which are recorded in a time sequence on a cloud server, are currently available as open data on the internet. We analyze such sequential data using graph topology, which reflects the information of corresponding geographical maps, and reproduce it in cyberspace using an agent-based model with similar probabilities to the accumulated rickshaw records from one spatial node to another. Although the numerical results of the agent traced in a simulated city are partially consistent with the rickshaw’s record, we identify some significant differences. We conclude that the rickshaw’s mobility observed at the actual sightseeing sites is partially in the random motion; some cases are strongly biased by memory routes. Such non-randomness in the rickshaw’s mobility indicates the existence of specific features in tourism sources that are identified for each sightseeing activity and affected by local sightseeing resources. View Full-Text
Keywords: low-power wide-area communication; positioning system; graph topology; agent-based simulation low-power wide-area communication; positioning system; graph topology; agent-based simulation
►▼ Show Figures 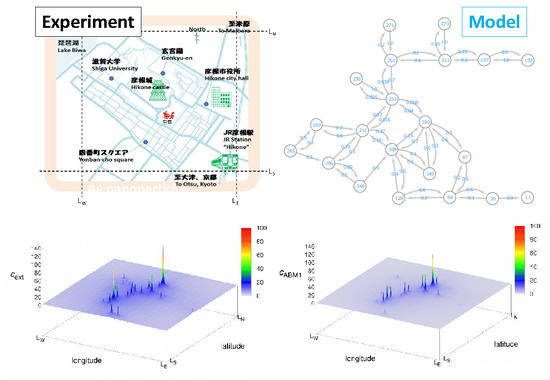