Standard Ethernet (IEEE 802.3 and the TCP/IP protocol suite) is gradually applied in industrial control system (ICS) with the development of information technology. It breaks the natural isolation of ICS, but contains no security mechanisms. An improved intrusion detection system (IDS), which is strongly correlated to specific industrial scenarios, is necessary for modern ICS. On one hand, this paper outlines three kinds of attack models, including infiltration attacks, creative forging attacks, and false data injection attacks. On the other hand, a two stage IDS is proposed, which contains a traffic prediction model and an anomaly detection model. The traffic prediction model, which is based on the autoregressive integrated moving average (ARIMA), can forecast the traffic of the ICS network in the short term and detect infiltration attacks precisely according to the abnormal changes in traffic patterns. Furthermore, the anomaly detection model, using a one class support vector machine (OCSVM), is able to detect malicious control instructions by analyzing the key field in Ethernet/IP packets. The confusion matrix is selected to testify to the effectiveness of the proposed method, and two other innovative IDSs are used for comparison. The experiment results show that the proposed two stage IDS in this paper has an outstanding performance in detecting infiltration attacks, forging attacks, and false data injection attacks compared with other IDSs. View Full-Text
Keywords: intrusion detection; Ethernet/IP; industrial control networks intrusion detection; Ethernet/IP; industrial control networks
►▼ Show Figures 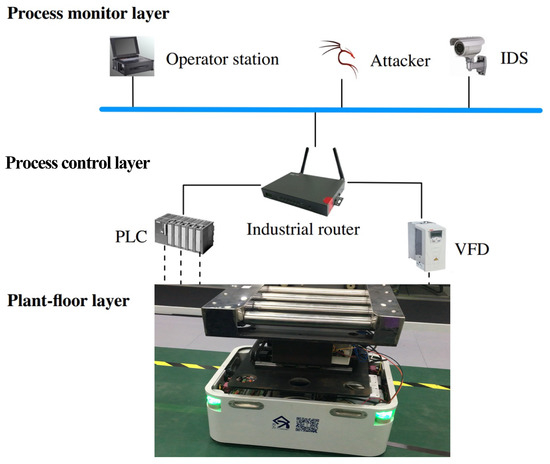