Applications of Nanomaterials in Leishmaniasis: A Focus on Recent Advances and Challenges

Nanostructures with spikes (NSPs) have been a subject of several surface-enhanced Raman scattering (SERS) applications owing to their significant Raman signal enhancement brought about by the combined effects of interspike coupling and the accumulated induction on the tips of spikes. Thus, NSPs offer great potential as a SERS-active substrate for relevant applications that require a high density of enhanced “hot spots”. In this study, Ag NSPs were synthesized in varying degrees of agglomeration and were thereafter deposited onto a transparent adhesive tape as a flexible substrate for SERS applications, specifically, in the detection of trace amounts of pesticides. These flexible substrates were referred to as Ag NSPs/tape and optimized with an enhancement factor (EF) of ca. 1.7 × 107. A strong resulting signal enhancement could be attributed to an optimal degree of agglomeration and, consequently, the distances among/between spikes. Long spikes on the synthesized core of Ag NSPs tend to be loosely spaced, which are suitable in detecting relatively large molecules that could access the spaces among the spikes where “hot spots” are generally formed. Since one side of the transparent tape is adhesive, the paste-and-peel off method was successful in obtaining phosmet and carbaryl residues from apple peels as reflected in the acquired SERS spectra. In situ trace detection of the pesticides at low concentrations down to 10−7 M could be demonstrated. In situ trace detection of mixed pesticides was possible as the characteristic peaks of both pesticides were observed in equimolar mixtures of the analytes at 10−2 to 10−4 M. This study is, thus, premised upon applying for in situ trace detection on e.g., fruit skin. View Full-Text
Keywords: nanostructures with spikes; surface-enhanced Raman scattering; flexible support; in situ trace detection; pesticides nanostructures with spikes; surface-enhanced Raman scattering; flexible support; in situ trace detection; pesticides
►▼ Show Figures 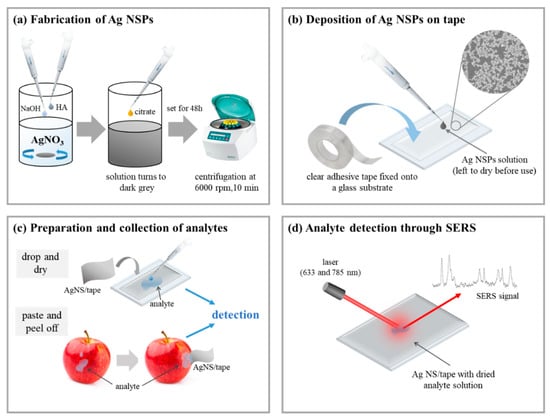