Antimicrobial Nanomaterials: Why Evolution Matters
Next Article in Special Issue

:
The effects of the initial emulsion structure (droplet size and emulsifier) on the properties of β-carotene-loaded emulsions and the bioavailability of β-carotene after passing through simulated gastrointestinal tract (GIT) digestion were investigated. Exposure to GIT significantly changed the droplet size, surface charge and composition of all emulsions, and these changes were dependent on their initial droplet size and the emulsifiers used. Whey protein isolate (WPI)-stabilized emulsion showed the highest β-carotene bioaccessibility, while sodium caseinate (SCN)-stabilized emulsion showed the highest cellular uptake of β-carotene. The bioavailability of emulsion-encapsulated β-carotene based on the results of bioaccessibility and cellular uptake showed the same order with the results of cellular uptake being SCN > TW80 > WPI. An inconsistency between the results of bioaccessibility and bioavailability was observed, indicating that the cellular uptake assay is necessary for a reliable evaluation of the bioavailability of emulsion-encapsulated compounds. The findings in this study contribute to a better understanding of the correlation between emulsion structure and the digestive fate of emulsion-encapsulated nutrients, which make it possible to achieve controlled or potential targeted delivery of nutrients by designing the structure of emulsion-based carriers.
Keywords:
emulsion; β-carotene; digestion; cellular uptake; bioavailability

Carotenoids are a class of natural pigments abundant in plants and fruits that can have many health benefits when consumed at proper levels. Previous studies have shown that carotenoids possess strong antioxidant activity and that intake of carotenoid-rich foods was correlated with the reduced risks of several chronic diseases, including cancers, cardiovascular diseases, age-related macular degeneration and cataracts [1,2]. Several potential mechanisms have been proposed to explain these biological activities, e.g., scavenging free radicals and preventing oxidative damage, altering transcription activity or functioning as precursor of vitamin A [3]. β-carotene is a representative member of the carotenoids family and has been widely studied due to its high pro-vitamin A activity. However, extreme water insolubility and instability greatly limit the health benefits of β-carotene. Therefore, the delivery of β-carotene requires an encapsulation and protection mechanism. Emulsions are ideal carriers for lipophilic nutrients, such as β-carotene, due to their ease of operation, maintenance of chemical stability, controlled release and potential for target delivery of encapsulated compounds [4].
Since emulsions are widely used as delivery systems for lipophilic nutrients [4,5], an in-depth understanding of the biological fate of emulsion droplets and encapsulated compounds in the digestive tract is necessary for optimizing the delivery efficiency of emulsions. The determination of the changes of droplet properties, e.g., size, surface charge and the subsequent release of encapsulated compounds during digestion, can also contribute to a better understanding of the mechanism of improved bioavailability by emulsion delivery. When being exposed to gastrointestinal tract (GIT) digestion, emulsions can show great changes in their droplet size, surface charge or compositions [6,7], due to the extremely acidic environment in the gastric phase or as a result of enzymatic hydrolysis in the mouth, gastric and intestinal phases; all of these changes can influence the digestion of emulsion droplets and thus the biological fate of nutrients within droplets.
Many previous studies have investigated the influence of emulsion structure, e.g., droplet size or emulsifiers, on the digestibility of lipid droplets in emulsions [8], the physical and chemical stability of emulsion-encapsulated nutrients [3] and the release of these encapsulated nutrients after passing through simulated GIT digestion [9]. The bioaccessibility of these encapsulated nutrients in emulsions with different initial droplet size [10], emulsifiers [11] and oil compositions [12] was also well evaluated by measuring the content of nutrients in micelle fractions after GIT digestion. However, these studies did not investigate the absorption of these nutrient-loaded micelles by enterocytes, which is important for the evaluation of the bioavailability of encapsulated nutrients. This may also be the main cause of the inconsistency observed between the bioaccessibility and the in vivo bioavailability of emulsion-encapsulated nutrients [13]. In addition, Dairy proteins are widely used as food emulsion stabilizers due to their edibility, health benefits and good amphiphilic properties. Many studies have been done on dairy protein-stabilized emulsions. However, the information on the cellular uptake of encapsulated nutrients in dairy-protein-stabilized emulsions (e.g., whey protein isolate or casein) after passing through GIT was very limited. The comparison between different dairy proteins concerning their influence on the digestion behavior of emulsions containing nutrients in GIT and the subsequent enterocytes cell absorption of released nutrients after GIT still needs further investigation. Furthermore, little is known about the influence of small initial droplet sizes (~1 μm) on the bioaccessibility of encapsulated nutrients.
Therefore, this study was designed to investigate the bioaccessibility and cellular uptake of an encapsulated lipophilic nutrient (β-carotene) in emulsions with different initial droplet sizes (~1 μm) and emulsifiers (whey protein isolate, sodium caseinate and Tween 80) by the simulated GIT digestion system and the Caco-2 cellular uptake assay. The changes of emulsion properties, such as droplet size and surface charge, during GIT digestion were also tested.

WPI, SCN or TW80 was dispersed (1.0%, w/w) in water containing 0.01% (w/w) sodium azide as continuous phases. The subsequent emulsion preparation was performed using the same process mentioned above with high-pressure homogenization at 70 MPa.

The creaming stability of different emulsions was evaluated using a Lumisizer (LUM GmbH, Berlin, Germany) as described previously [14]. In this study, emulsions were centrifuged at 2300× g at 25 °C with a scanning rate of once every 10 s for 1200 s.

2.6. In Vitro Bioaccessibility of BC

The bioaccessibility of BC after the intestinal phase was evaluated as described previously with minor modification. An aliquot of raw digesta from the intestinal phase was centrifuged at 2700× g for 40 min at 4 °C, and the supernatant was collected and considered as the micelle fraction, in which the bioactive compound is solubilized. Aliquots of 2 mL of the raw digesta or the micelle fraction were extracted twice with ethanol/n-hexane. The top layer containing the solubilized BC was collected and analysed by RP-HPLC as described below.
The bioaccessibility of encapsulated BC was calculated using the following equation: where Cmicelle and Cinitial are the concentration of BC in the micelle fraction after intestinal phase digestion and initial emulsion before GIT digestion, respectively.

Caco-2 cells were seeded in a 6-well plate at a density of 3.5 × 105 cells well−1, and cellular uptake experiments were performed 5–7 days after seeding. Micelle fractions of different BC-loaded emulsions after the intestinal phase were 20-fold diluted with complete medium. One millilitre of diluted samples was added to each well in a 6-well plate, which was then incubated at 37 °C and 5% CO2 for 4 h. Before collection, cells were washed three times with PBS buffer solution. Then, cells were collected, lysed, extracted and analysed for BC content by RP-HPLC.

BC was extracted from the micelle fraction or raw digesta emulsion systems with ethanol/n-hexane (1:2, v/v) two times. The hexane layers were combined and dried under a stream of nitrogen gas and dissolved in 0.6 mL ethanol for HPLC analysis.

The concentration of BC was determined using an Agilent 1200 series system with a DAD UV-Vis detector (Agilent, Santa Clara, CA, USA); the column was reversed phase C18 (4.6 × 250 mm, 5 μm, 300 Å, Phenomenex); the operation temperature was 30 °C; elution was performed with 90% ethanol and 10% acetonitrile from 0 to 15 min; the flow rate was 1 mL/min; the detection wavelength was 450 nm; the injection volume was 20 μL. The peak area of BC on HPLC showed a good linear correlation with the BC concentration in the range of 0.05~5 μg/mL (data not shown).

All experiments were repeated at least three times. One-way analysis of variance (ANOVA) was employed to compare means of data. A t-test was used to determine the differences between means, and significant differences were determined at the 0.05 level (p < 0.05).

3.2. Characterization of Emulsions after Being Exposed to GIT Digestion

3.3. In Vitro Bioaccessibility of BC

The assistance of Sean Hogan with the rheometry of emulsions is greatly acknowledged. This work was supported by the China Scholarship Council (No. 201508300001), Teagasc-The Irish Agriculture and Food Development Authority (RMIS6821, and the National Natural Science Foundation of China (No. 31628016). 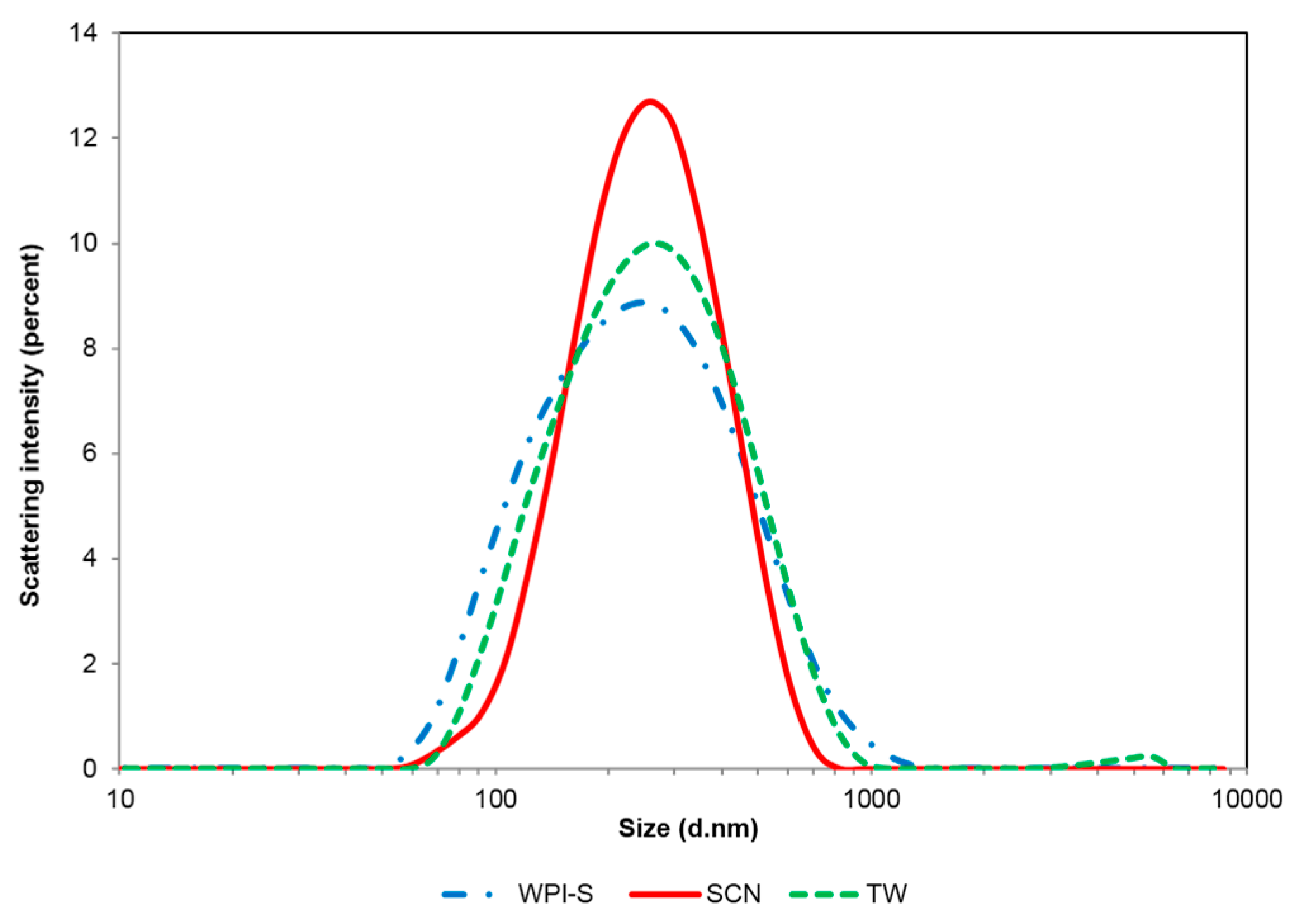 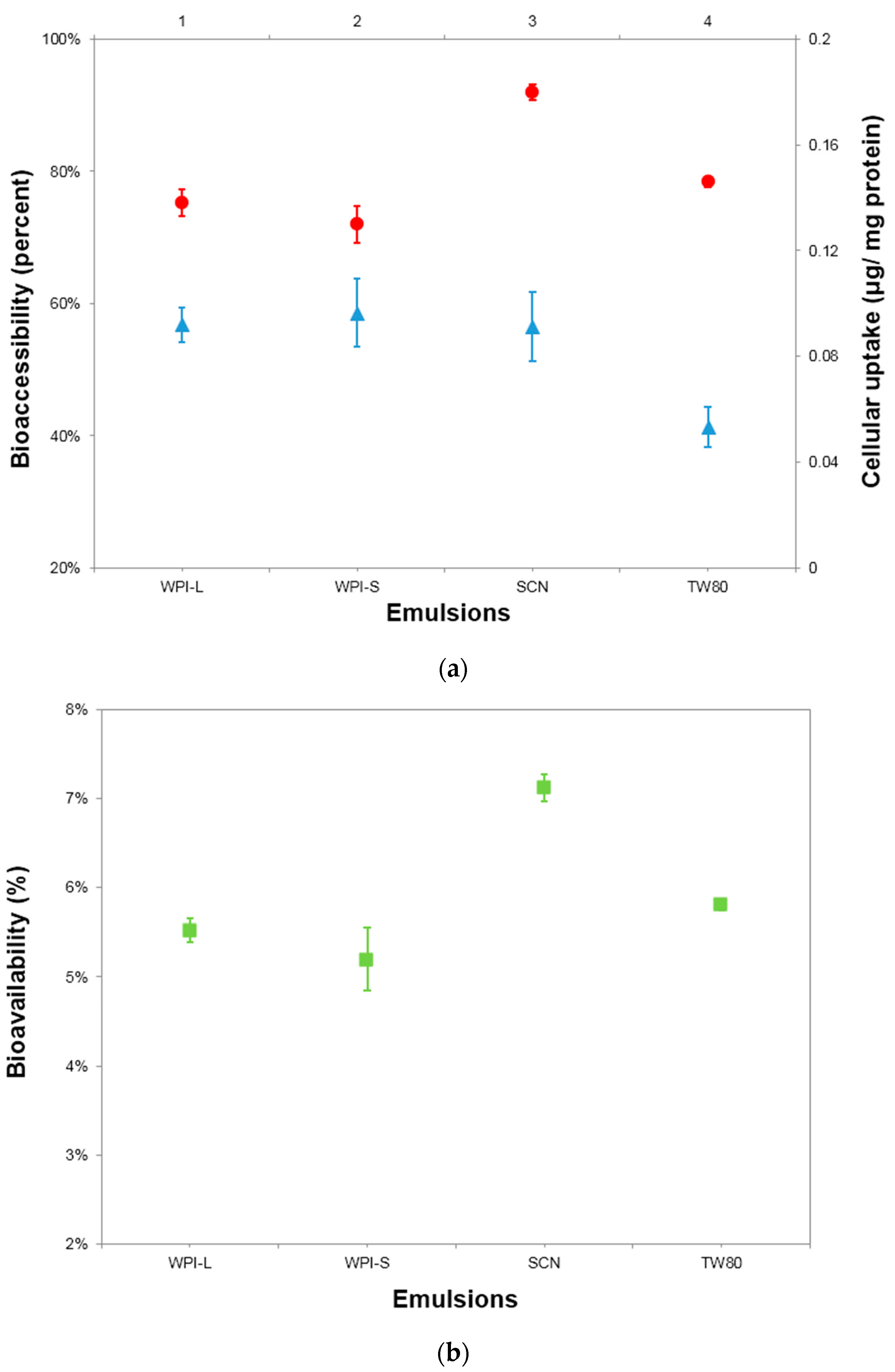