Get out of Church! The Case of #EmptyThePews: Twitter Hashtag between Resistance and Community

This study explores the relationship between politics and religion, resistance and community, on social media through the case study of #EmptyThePews. #EmptyThePews was created in August 2017 after the events in Charlottesville, calling users who attend Trump-supporting churches to leave those churches as a form of protest. What starts out as a call of action, becomes a polysemic online signifier for sharing stories of religious abuse, and thus a format for identity and community construction. An analysis of 250 tweets with #EmptyThePews revels five different uses of the hashtag, including highlighting racial, gender, and sexual identity-based discrimination; sharing stories of religious or sexual abuse; constructing a community and identity; and actively calling for people to empty churches. This Twitter hashtag did not facilitate an active movement of people leaving churches, but instead created a Twitter community. Giving voice and space to this community, however, can be seen as a form of resistance. View Full-Text
Keywords: hashtag; activism; online communities; online social movements; digital religion; Trump; evangelical churches hashtag; activism; online communities; online social movements; digital religion; Trump; evangelical churches
►▼ Show Figures 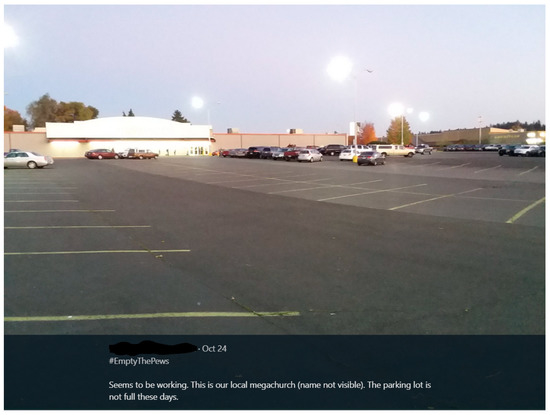 Tsuria, R. Get out of Church! The Case of #EmptyThePews: Twitter Hashtag between Resistance and Community. Information 2020, 11, 335.


Tsuria R. Get out of Church! The Case of #EmptyThePews: Twitter Hashtag between Resistance and Community. Information. 2020; 11(6):335.