Readiness and Success of Ubiquitous Learning in Indonesia: Perspectives from the Implementation of a Pilot Project
Previous Article in Journal

DFTHR: A Distributed Framework for Trajectory Similarity Query Based on HBase and Redis

In terms of formal concept analysis (FCA) [1,2], how to generate a relation diagram that is effectively and quickly built by the formal context has been extensively studied by scholars [3,4,5,6,7,8,9,10,11]
As an efficient tool for data analysis, FCA has attracted the attention of the majority of researchers [2], and has been applied to many areas [12]. In the past, FCA has been widely used in many different areas such as software engineering [13,14], linguistics [15,16], information retrieval [17,18], ontology engineering [19,20], bioinformatics [21,22], data mining [23,24], and complex network mining [23]. Intent and extent constitute every formal concept. The extent refers to the set of objects which has the same attributes, while the intent is the description of the concept (the set of attributes), which means the example has the common feature in this concept. This structure describes the essential relationship between objects and attributes and shows the formalization of all concepts in the category of philosophy [9].
The formation of a concept lattice is actually the formation of concept clusters. Since the concept lattice has been put forward, building a concept lattice from the formal context has become the focus in the field of conceptual research. According to the comparison of main classical algorithms, we can conclude that the matter of greatest concern is how to build the concept lattice efficiently [25]. The number of concepts growing exponentially will lead to considerable time consumption, so using and creating an efficient algorithm is important [26]. Existing concept lattice construction algorithms can be roughly divided into two categories: incremental and batch algorithms [3,4,26,27]. Batch algorithms [5,28,29] generally use two methods to construct a concept lattice: one of them is to build a concept lattice from top to bottom and the other is to build a concept lattice from bottom to top. On the other hand, incremental algorithms add objects or attributes one by one from the formal context progressively, which can change the concept lattice dynamically according to the changes made to a formal context. Consequently, it can reduce the unnecessary computational time by avoiding rebuilding the concept lattice.

2. The Basis of Formal Concept Lattice

Compared to batch algorithms, those advantages of incremental algorithms can make this algorithm more suitable to dynamic data sets. The Godin algorithm [4] and the AddIntent algorithm [3,27] are two classical incremental algorithms. Valtchev and other scholars [30] have improved the Godin algorithm, and the algorithm was also integrated into a very effective incremental mining framework of the closure frequent item-set. Nevertheless, Lingling and others refined the AddIntent algorithm, and what they did is add two fields to every concept, which are used to find new concepts at express speed. Empirical analysis shows what Lingling improved is better than the AddIntent algorithm at run time when the number of attributes is more than the objects in formal contexts.
The basic idea of incremental algorithms is to add a new object g (or a new attribute m) to an existing concept lattice L1. On the basis of the set of attributes which g has (or the set of objects which m has) L2 is built and the number of concepts of L2 is larger than that of L1. According to existing researches, the concepts are divided into three categories after inserting a new object (or a new attribute): old concepts, new concepts and modified concepts, where old concepts consist of general old concepts and generator concepts. Complete definitions are listed in [27].
In this paper, a new algorithm (the FastAddExtent algorithm) is proposed, which the AddAtom algorithm is the initial prototype [31,32]. The relationship between L1 and L2 is shown in Figure 1 as follows.

The FastAddExtent algorithm proposed in this paper, like the original AddIntent algorithm, uses a recursive way to construct a concept lattice. The FastAddExtent algorithm make refinements by adding four data fields to a concept: visited, NewConcept, doExtent, and MaximalConcept. Here, visited is a data field that stores an integer. The ID of a new attribute will be assigned to visited when the concept is being accessed. If visited of one concept is found equal to the id of a new attribute, we know this concept has been visited. The NewConcept field stores the returned new concept during the process of adding one attribute. If one concept is visited, the NewConcept field of the concept will be assigned to the candidate directly. Therefore, unnecessary recursive calls and comparisons can be avoided. The doExtent field stores the set of extent passed to the FastAddExtent procedure, and the canonical generator or the modified concept will be stored in the MaximalConcept of the GeneratorConcept. Obviously, the added fields doExtent and MaximalConcept make the parameter GeneratorConcept closer to the ClosureConcept so that we can decrease the time of search. Those refinements mentioned above are also the differences between FastAddExtent and FastAddIntent.
The Algorithm 1 will be described in which the lines with the mark {*} is are newly added compared to the AddExtent algorithm, while the lines with the mark {#} are modified.
The following paragraphs primarily explain the differences between the FastAddExtent algorithm and the AddExtent algorithm. The unchanged part of AddExtent and function can be referred to in [26], and this paper does not make a statement.
All the concepts which are accessed include new concepts, modified concepts, canonical generators, non-canonical generators in the whole process of running the algorithm. Since this algorithm is recursive, a new concept maybe be found as a modified concept in some recursive calls. We can see that an entry n is added to the parameters of the FastAddExtent algorithm, which is equal to the ID of the added attribute. This value n will be assigned to each accessed concept, indicating that the concept is last accessed by attribute n. In line 45, the last new concept called newConcept is given to the NewConcept field of the canonical generator GeneratorConcept that calls the earliest recursion in the process of adding an attribute. From line 19 to line 22, the NC is a newConcept returned by recursive calling FastAddExtent through the parameter candidate, and assigns NC to the candidate’s NewConcept field, and then changes the visited field of the candidate to the current attribute id, and finally sees the NC as a new candidate. All the operations of lines 19 to 22 serve for line 13 and line 14, and when the value of visited of a candidate equals to the id of the new attribute, we know the concept has been visited. Then the value of candidate.NewConcept is assigned directly to the candidate, eliminating a lot of unnecessary recursive calls and comparisons.
Here we use a case to explain the above added lines in the favor of reducing the running time. Table 1 shows the formal context before adding the attribute e, while Table 2 shows the formal context after adding the attribute e. Correspondingly, Figure 1 depicts the concept lattice based on Table 1 and Figure 2 depicts the concept lattice based on Table 2.
All the concepts showed in Figure 3 have been marked to view easily and the labels are as follows:
In the process of adding attribute e whose object set is {1, 2, 3}, c1 is the canonical generator of the new concept c5. Visibly c1 has two candidates, and then the extent of two candidates need to do the intersection with {1, 2, 3}, respectively. At the same time, the results concluded from previous calls are that c2.NewConcept = c6, c3.NewConcept = c7, and the values of visited of c2 and c3 are both 5. Meanwhile, we suppose that c6 is built earlier than c7. In the process, c4 is a candidate of c2, and c8 is generated by c4 which is seen as the canonical generator, where c4.NewConcept = c8, c4.visited = 5. When creating c7, the candidate of c7 is c4. Because c4.visited = 5, c4 has been visited. Then, c4.NewConcept will be assigned directly to the candidate of c7. Eliminating a recursive call and many following comparisons greatly reduces the running time.

As recursive calls consume time greatly, it is important to minimize the number of recursive calls in the search processes. The function GetClosureConcept finds canonical generators and modified concepts, so reducing the number of calling GetClosureConcept can help find canonical generators and modified concepts faster. There are two new fields added to every concept, doExtent and MaximalConcept, to achieve the desired effect. In lines 1, 3, and 4 of Algorithm 1, the value of the initial generatorConcept passed to the FastAddExtent function is assigned to tempConcept, and the GetClosureConcept function is called to find canonical generators or modified concepts under the extent value which is equal to extent. Then the result is assigned to GeneratorConcept. At the same time, to mark the initial GeneratorConcept assigned to tempConcept, the doExtent field of tempConcept is equal to extent, which equals the extent of the FastAddExtent. The MaximalConcept field stores the returned canonical generator. Lines 16–17 in Algorithm 1 are to judge the marks above: if the extent meet (candidate.Extent ∩ extent) is included in the doExtent field of one candidate of the GeneratorConcept, then the candidate.MaximalConcept will be assigned to the candidate. When the FastAddExtent function is called again, the number of recursive calls will be reduced because the candidate is now closer to the real ClosureConcept at this time The recursive times and the efficiency are even better in large data sets.
Most of Algorithm 2 in the FastAddExtent is identical to the function GetMaximalConcept. The GetClosureConcept has extra lines (line 1 to line 4) by adding the function L.Find(), which are used to find concepts in the concept lattice by indexes like hash values.
Algorithm 3 is the beginning of the construction of a concept lattice. In Algorithm 3, The modified part is line 6 where the FastAddExtent algorithm adds a parameter i to the function CreateLatticeIncrementally compared to the AddExtent algorithm. This parameter i will be assigned to the visited of every concept to mark the concept whether it was visited when a new attribute is added.

Our algorithm showed above has a number of optimizations, i.e., adding new data fields to every concept. For example, lines 1–4, 13–23, and 45 of Algorithm 1 reduce unnecessary comparisons and traversal of the lattice.
Although our algorithm does not change the time complexity compared to the AddExtent, the running time is reduced so that the experimental results can come out quickly. Therefore, the FastAddExtent algorithm has a bound of O(|L||G||M|3) of a worst-case time complexity and the main details are discussed as follows [26]. The complexity relies on the number of invocations of the FastAddExtent function, while it calls the GetClosureConcept function only once for every extent of the lattice, as occurs in AddExtent. Since the length of the GeneratorChildren list never exceeds |M| [9] and the complexity of the GetClosureConcept function is restricted by O(|G||M|2) [26], the complexity of one call of FastAddExtent is roughly estimated as O(|G||M|3). Therefore, the total complexity is O(|L||G||M|3).

This research was funded by Major Project for Science and Technology Development of Henan Province, grant number (152102210093). 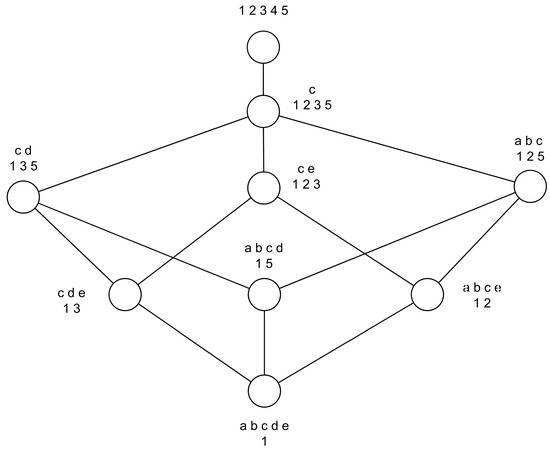 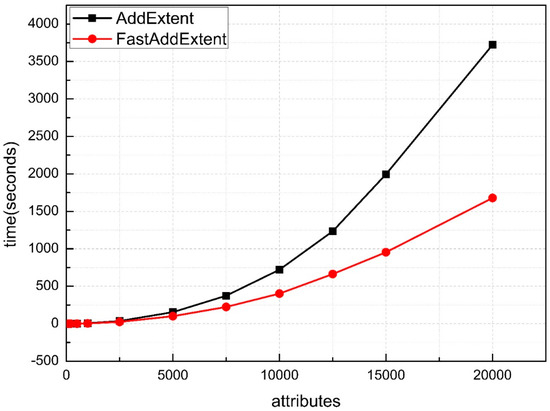 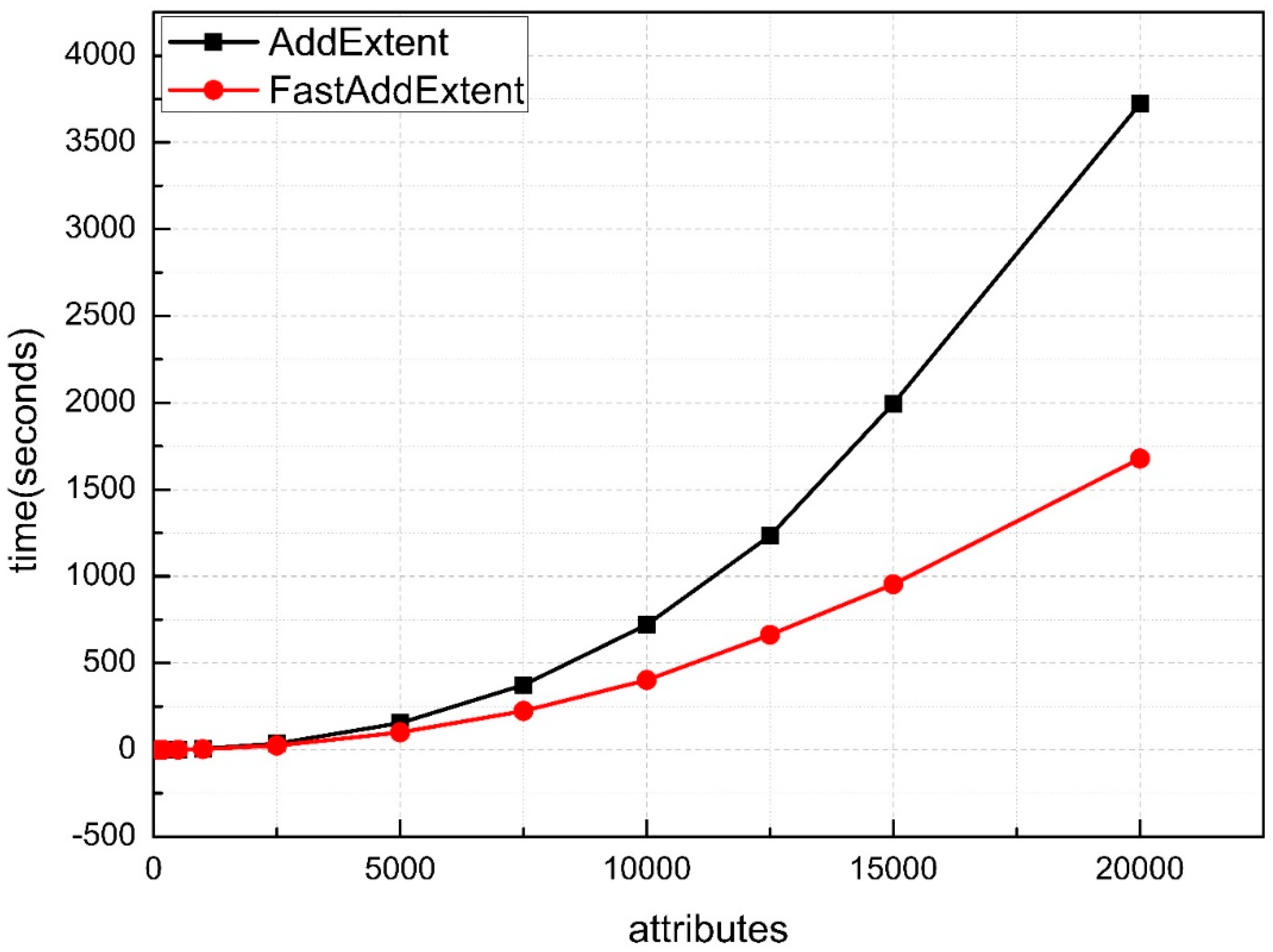 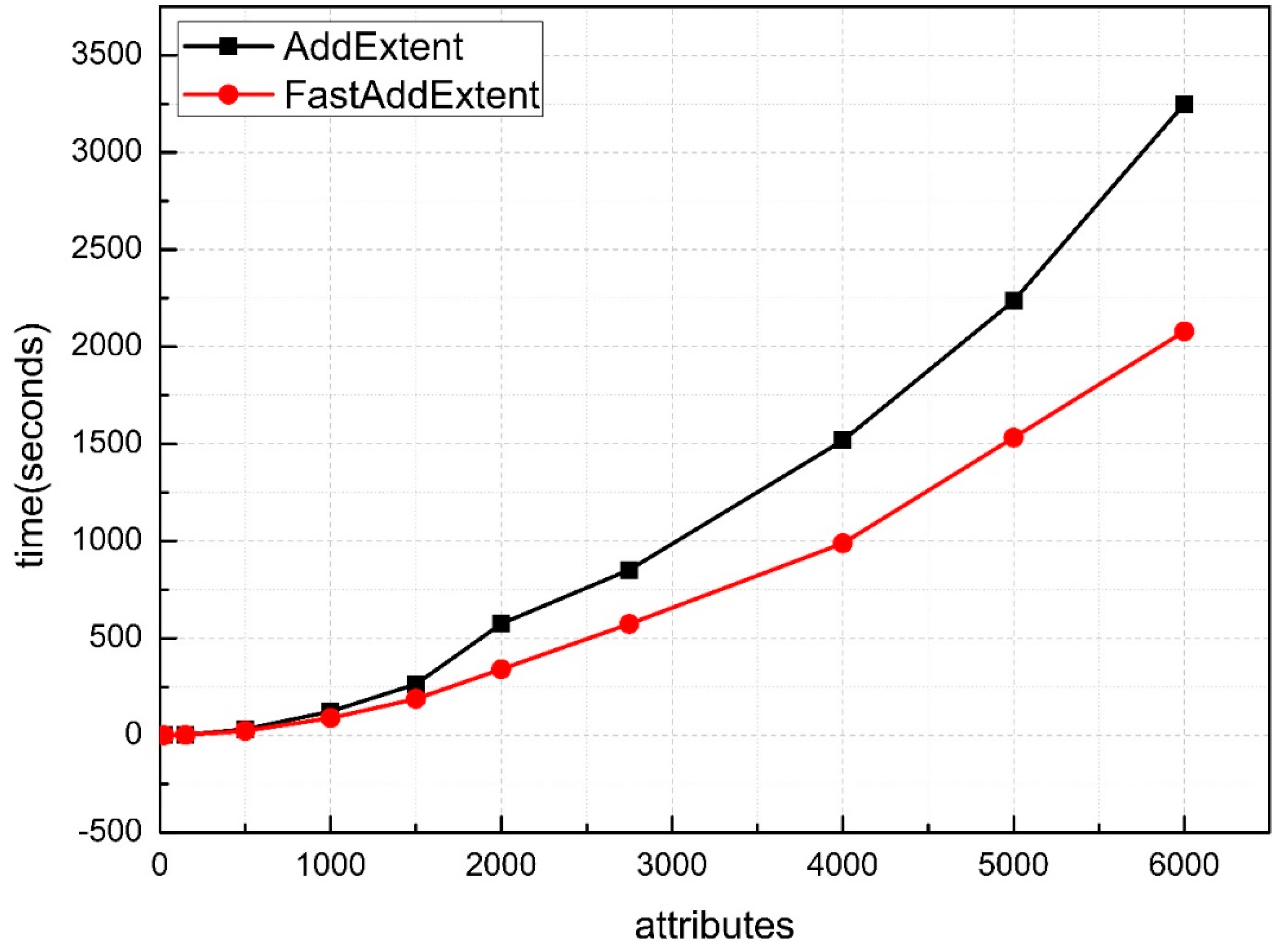 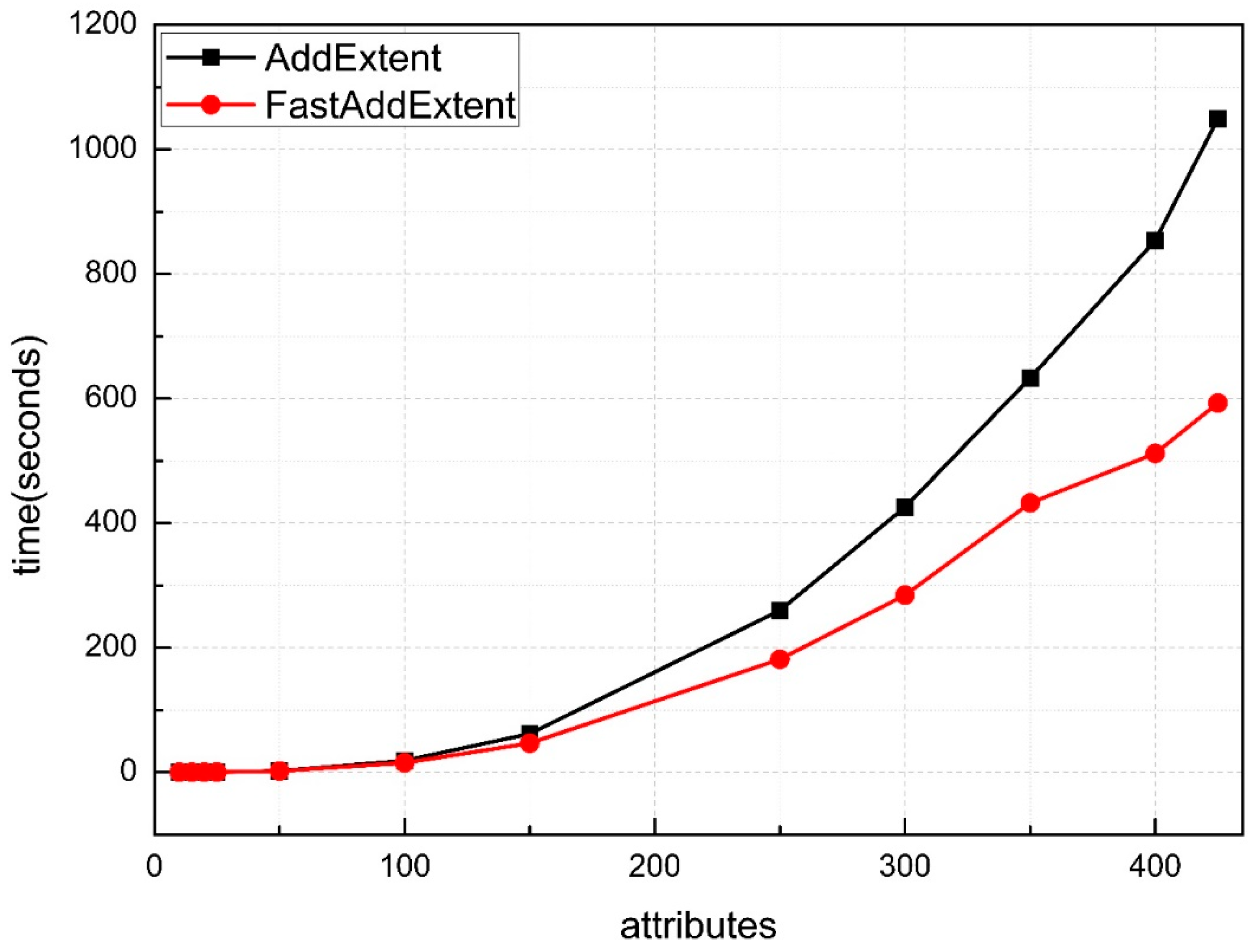