Antisemitism in the Muslim Intellectual Discourse in South Asia

Educational Environments with Cultural and Religious Diversity: Psychometric Analysis of the Cyberbullying Scale

The objective of this research is to adapt and validate a useful instrument to diagnose cyberbullying, provoked by intolerance towards cultural and religious diversity, identifying the profile of the aggressor and the victim. The study was carried out using the Delphi technique, exploratory factor analysis (EFA), and confirmatory factor analysis (CFA). The selected sample was composed of 1478 adolescents, all students from Compulsory Secondary Education of Spain. The instrument items were extracted from relevant scales on the topic. The initial questionnaire was composed of 52 items and three underlying constructs. After validation with EFA (n = 723), the structure was checked, and the model was later corroborated with CFA (n = 755) through structural equations (RMSEA = 0.05, CFI = 0.826, TLI = 0.805). The reliability and internal consistency of the instrument were also tested, with values for all dimensions being higher than 0.8. It is concluded that this new questionnaire has 38 items and three dimensions. It has an acceptable validity and reliability, and can be used to diagnose cyberbullying caused by the non-acceptance of cultural and religious diversity in Compulsory Secondary Education students. View Full-Text
Keywords: cyberbullying; intercultural; religion; exploratory factor analysis; confirmatory factor analysis; validation cyberbullying; intercultural; religion; exploratory factor analysis; confirmatory factor analysis; validation
►▼ Show Figures 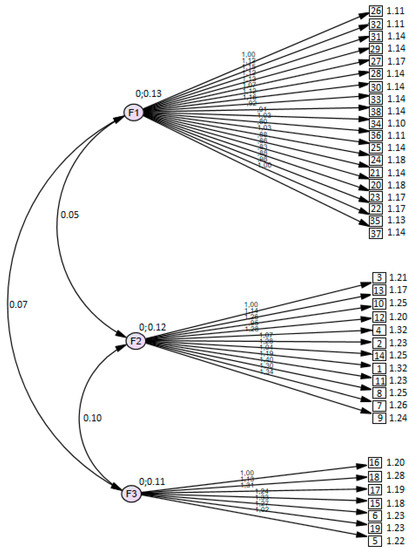