The More You Search, the More You Find: A New Mediterranean Endemism of the Genus Ocenebra Gray, 1847 (Mollusca: Gastropoda: Muricidae) from a Submarine Cave of the Messina Strait Area (Italy)

Three hundred years of study on the Mediterranean molluscan fauna led the scientific community to consider it as the best ever known. However, the rate at which new taxa are discovered and described every year is still remarkably high, even in key predators such as Muricidae Rafinesque, 1815. Within this family, the genus Ocenebra Gray, 1847 comprises species widely distributed in the northeastern Atlantic and the Mediterranean Sea that were already the target of a decadal nomenclatural, morphological, and molecular combined research. Notwithstanding, we hereby describe an additional ocenebrid endemism from the Mediterranean Sea, whose distribution appears to be restricted to a circalittoral submarine cave of the Messina Strait area (Italy). The new species Ocenebra vazzanai is compared with the recent Atlanto-Mediterranean congeneric taxa on the basis of the known type materials, and a table summarizing the main diagnostic features of the species is offered to facilitate future identifications. The high biodiversity highlighted in the genus Ocenebra reveals a wide adaptive radiation and suggests the necessity of further studies aiming to tackle biodiversity issues even in popular groups, such as molluscs, and in widely studied biogeographic areas, such as Italy, and the Mediterranean basin in general. View Full-Text
Keywords: mussel drills; adaptive radiation; biodiversity; alpha taxonomy; Ocenebra vazzanai new species mussel drills; adaptive radiation; biodiversity; alpha taxonomy; Ocenebra vazzanai new species
►▼ Show Figures 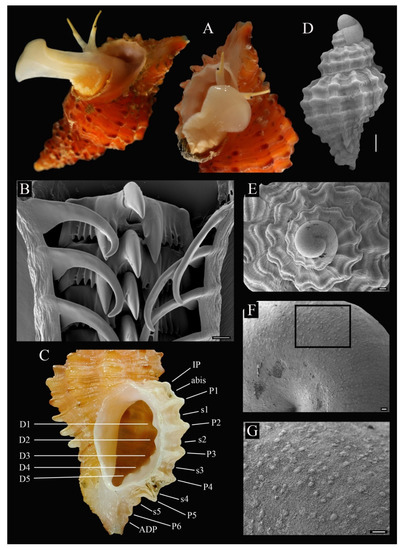 
Crocetta, Fabio, Roland Houart, and Giuseppe Bonomolo. 2020. "The More You Search, the More You Find: A New Mediterranean Endemism of the Genus Ocenebra Gray, 1847 (Mollusca: Gastropoda: Muricidae) from a Submarine Cave of the Messina Strait Area (Italy)" Journal of Marine Science and Engineering 8, no. 6: 443. https://doi.org/10.3390/jmse8060443