An alongshore array of pressure sensors and a cross-shore array of current velocity and pressure sensors were deployed on a barred beach in southwestern Australia to estimate the relative response of edge waves and leaky waves to variable incident wind wave conditions. The strong sea breeze cycle at the study site (wind speeds frequently > 10 m s−1) produced diurnal variations in the peak frequency of the incident waves, with wind sea conditions (periods 2 to 8 s) dominating during the peak of the sea breeze and swell (periods 8 to 20 s) dominating during times of low wind. We observed that edge wave modes and their frequency distribution varied with the frequency of the short-wave forcing (swell or wind-sea) and edge waves were more energetic than leaky waves for the duration of the 10-day experiment. While the total infragravity energy in the surf zone was higher during swell forcing, edge waves were more energetic during wind-sea periods. However, low-frequency (0.005–0.023 Hz) edge waves were found to be dominant in absence of wind-sea conditions, while higher-frequency (0.023–0.050 Hz) edge waves dominated when wind-sea conditions were present. View Full-Text
Keywords: edge waves; infragravity waves; barred beach; field observations edge waves; infragravity waves; barred beach; field observations
►▼ Show Figures 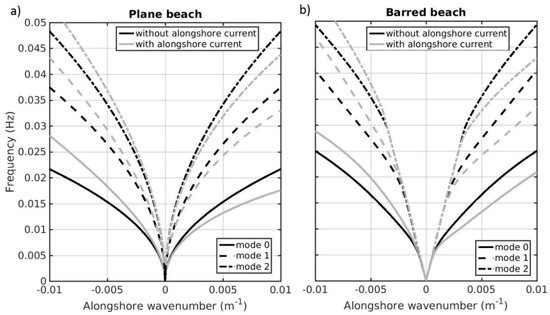