A simple algorithm previously used to evaluate steady-state global Ocean Thermal Energy Conversion (OTEC) resources is extended to probe the effect of various effluent discharge methodologies. It is found that separate evaporator and condenser discharges potentially increase OTEC net power limits by about 60% over a comparable mixed discharge scenario. This stems from a relatively less severe degradation of the thermal resource at given OTEC seawater flow rates, which corresponds to a smaller heat input into the ocean. Next, the most practical case of a mixed discharge into the mixed layer is found to correspond to only 80% of the so-called baseline case (mixed discharge at a water depth of initial neutral buoyancy). In general, locating effluent discharges at initial neutral-buoyancy depths appears to be nearly optimal in terms of OTEC net power production limits. The depth selected for the OTEC condenser effluent discharge, however, has by far the greatest impact. Clearly, these results are preliminary and should be investigated in more complex ocean general circulation models. View Full-Text
Keywords: Ocean Thermal Energy Conversion; OTEC; OTEC effluent discharge Ocean Thermal Energy Conversion; OTEC; OTEC effluent discharge
►▼ Show Figures 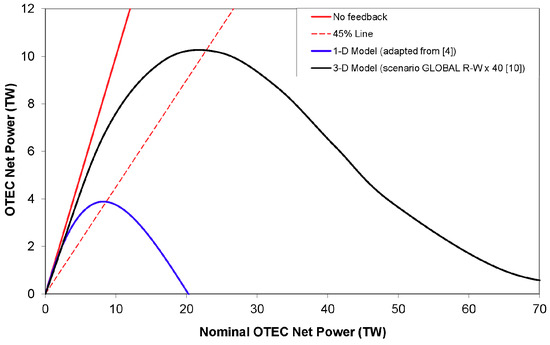