Evolutionary Game Model of Strategic Maritime Transport Passages: A Case of the Strait of Hormuz
Next Article in Special Issue

Vocal Behaviour of a Bottlenose Dolphin Pod during a Deadly Bycatch Event in the Gulf of Catania, Ionian Sea
Previous Article in Journal

The aim of this study is to evaluate the presence of biodiversity hotspots in Agrigento waters (Mediterranean Sea) to define the conservation area for bottlenose dolphins (Tursiops truncatus) and seabirds (Calonectris diomedea, Puffinus yelkouan, and Hydrobates pelagicus), according to European directives. With this purpose, the maximum entropy algorithm (MaxEnt) was applied to the sighting points of the focal species. They co-occur in the study area and have been documented to forage behind trawlers. In this study, a fishing rate was designed and used as an explanatory variable of the species distribution, together with physiographic variables. Data were collected during 68 surveys in the waters off Agrigento province. MaxEnt models showed a strong predictive power, with distance from the coast being the greatest predicting variable, followed by slope, depth, and fishing rate. For all the species considered, the probability of presence increased as the fishing rate grew. Cartographic analysis revealed one area shared by the species, which occupies 529 km2, from the shoreline to 100 m depth. This study increases knowledge on the distribution and habitat preferences of the target species in the Sicilian waters. Evaluating the influence of fisheries is a promising method that needs further testing to apply effective management measures. View Full-Text
Keywords: bottlenose dolphin; seabirds; distribution; fisheries; management; MaxEnt model bottlenose dolphin; seabirds; distribution; fisheries; management; MaxEnt model
►▼ Show Figures 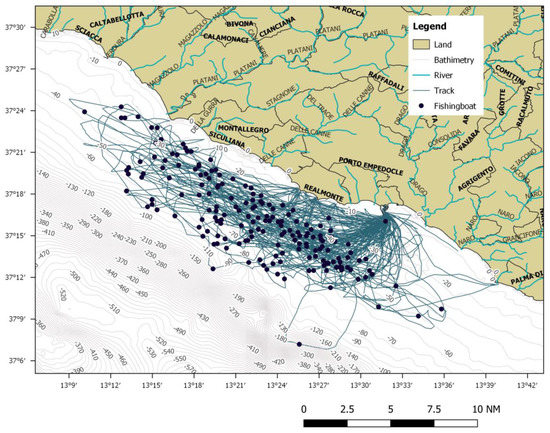 
Ranù M, Vanacore A, Mandich A, Alessi J. Bottlenose Dolphins and Seabirds Distribution Analysis for the Identification of a Marine Biodiversity Hotspot in Agrigento Waters. Journal of Marine Science and Engineering. 2022; 10(3):345. https://doi.org/10.3390/jmse10030345