Resistance to herbicides in Italian ryegrass (Lolium perenne L. ssp. multiflorum (Lam.) Husnot) is an economically important herbicide-resistance issue in world agriculture. Diclofop-resistant ryegrass is the number one weed problem in Arkansas wheat. Field studies were conducted from 2006 through 2008 at Bredlow corner and Fayetteville, Arkansas, USA to determine the effect of herbicide programs consisting of pinoxaden (Axial) alone or in mixtures with preemergence and postemergence herbicides, along with tillage systems, for managing diclofop-resistant Italian ryegrass. Italian ryegrass control, wheat injury, and grain yield were evaluated. A single treatment with pinoxaden alone resulted in 58% ryegrass control and 1488 kg ha−1 grain yield. The best treatment was metribuzin followed by mesosulfuron, which resulted in 2793 kg grain yield ha−1, a 47% increase compared to pinoxaden alone. In Fayetteville (2006–2007 and 2007–2008), the best treatment was two applications of metribuzin, which yielded about 3700 kg grain ha−1. A single application of pinoxaden resulted in 40% loss of grain yield compared to a single application of flufenacet + metribuzin and almost 50% yield loss compared to sequential application of metribuzin. Yield loss was attributed due to insufficient control of Italian ryegrass. The effect of tillage on Italian ryegrass was inconsistent between years and treatments. In the first year, for example, tillage × herbicide treatments did not differ. In the second and third year, control of Italian ryegrass was better in no-till than in conventional till in both locations. In conclusion, pinoxaden alone could not control diclofop-resistant Italian ryegrass sufficiently. Other herbicide modes of action need to be added to the management program of diclofop-resistant Italian ryegrass, especially one with residual activity such as metribuzin. View Full-Text
Keywords: ACCase inhibitor herbicide; cultural practices; graminicide herbicides; tillage; yield reduction ACCase inhibitor herbicide; cultural practices; graminicide herbicides; tillage; yield reduction
►▼ Show Figures 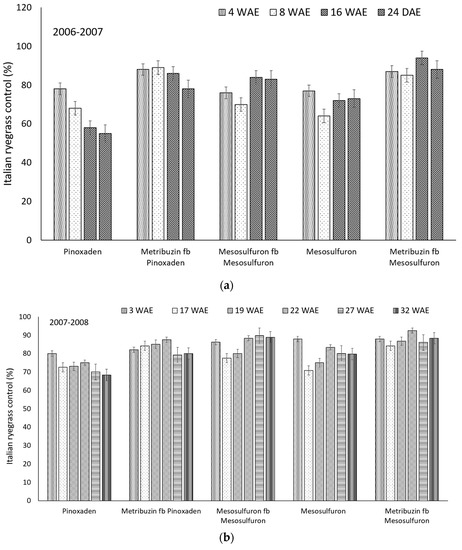