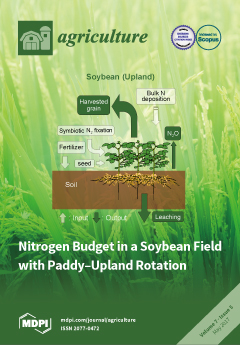 Cover Story (view full-size image): In northern Japan, declines in soil nitrogen fertility have occurred in paddy–upland rotation systems with soybean cultivation. To evaluate the nitrogen budget in the system, we investigated nitrogen flows by a 6-year lysimeter experiment. The nitrogen budget during soybean cultivation was negative. The nitrogen budget during rice cultivation and the effects of preceding compost application on the nitrogen budget and soil nitrogen fertility were also investigated and discussed in detail. View this paper
Previous Issue
Volume 7, April
Next Issue
Volume 7, June
We use cookies on our website to ensure you get the best experience. Read more about our cookies here.
Accept
We have just recently launched a new version of our website. Help us to further improve by taking part in this short 5 minute survey here. here.
Never show this again